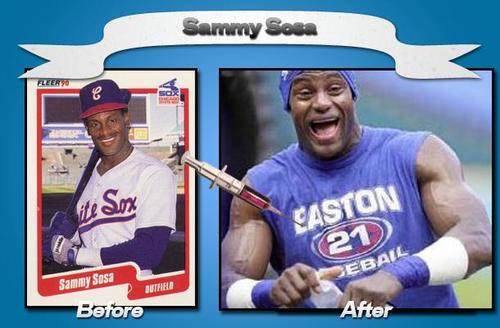 Steroids and Jocks: A Short History of Not Noticing

I’ve long been interested in the history of how the sporting press botched the steroids story so badly for so many years because it’s instructive about much else. It was like a slow-motion car crash that unfolded in front of my eyes for many years.

In Grantland last year, Bryan Curtis reconstructed several episodes from the failure to report the story in baseball, such as this initial tale from 1988, about 15 years before steroids in baseball became Respectable News.

The Steroid Hunt We know what MLB players were doing during the steroid era. Here’s what baseball writers did.

Nightwatch sounds like a drama about soldiers on the Northern Wall, but it was mainly for insomniacs without basic cable. Every weekday at 2 a.m., Charlie Rose’s face would appear on CBS. Rose would question his guests, quote from their books and films, and lift a skeptical eyebrow. On September 28 [1988], Rose introduced Thomas Boswell, a sports columnist at the Washington Post. The pennant race was heating up. They would talk baseball.

Boswell began to discuss Jose Canseco, who was wrapping up baseball’s first 40/40 season and soon to win the American League MVP. Canseco, Boswell said, is “the most conspicuous example of a player who has made himself great with steroids.”

All over America, the nodding heads of baseball writers snapped awake. “The first thing I thought was, OK, here comes a lawsuit,” said Bob Nightengale, then of the Kansas City Star. “That was the stunning thing: not that he was saying some dark secret that we didn’t know but that he would say it publicly.” Nightengale picked up the phone and called a pal in the Bay Area to see if he needed an item for his notebook column.

“I was not surprised,” said Ray Ratto, who was the Giants beat writer at the San Francisco Chronicle. “But I remember thinking, I wish there was more than just Boswell’s say-so.”

Indeed, the first major shot fired by the press amounted to one writer’s word. But among baseball writers, the word couldn’t have been stronger. Boswell was writing in the same zip code as Red Smith. Though he’d only been a Post columnist for four years, he had published three essay collections. “That’s when Boswell was the swinging dick in the country,” said Ratto. “When he said stuff, people stopped and listened. There’s always one guy on the East Coast who gets to be that guy for a while. Back then, he was that guy.”

It’s hard to overstate the shock waves this sent through baseball. The next day, the Oakland A’s manager, Tony La Russa, said Boswell was full of it.

Boswell fired back that La Russa had been one of his sources. He said La Russa had told him, “Jose made some mistakes back then” — during his time in the minors — “but he’s all natural now.” Boswell showed his notes — which contained the words “Jose Canseco milkshake,” the slugger’s concoction of steroids — to a fellow reporter.

Here’s an August 19, 1988 column that Boswell wrote in the Washington Post about Canseco’s ongoing 40-40 season. There’s no overt mention of steroids in it yet.

Canseco said he was about to sign a $1 million endorsement contract with Pepsi. When Boswell uttered the word “steroids” on national TV, Pepsi pulled the offer. That October, when the A’s went to Fenway Park to play in the ALCS, Red Sox fans in right field chanted “STER-oids! STER-oids!” (In Oakland, someone held up a sign that read “Drug Test Boswell.”)

There was one strange thing about Boswell’s accusation. It never appeared in the Washington Post.

“Like any other newspaper of substance,” said George Solomon, who was the Post‘s sports editor, “you have to have your sources. You have to be 100 percent sure of what you print. At that point, we were not. What Boswell said on CBS was Boswell’s opinion.”

Boswell had put the notion of steroids in baseball into the air. But he hadn’t gotten it into the newspaper.

I would imagine that the reason Boswell went public with his accusation of Canseco on September 28, 1988 was because four days earlier on September 24, 1988 Ben Johnson had defeated Carl Lewis in the 100m dash at the Seoul Olympics, the most famous 100m sprint of all time, only to have his gold medal retracted two days later for being ‘roided out of his gourd.

That was hardly the first time steroids came up at the Olympics. They were a major topic at the 1976 Montreal Summer Games when the East German women’s swim team dominated. America’s Shirley Babashoff complained and was denounced so nastily for complaining about the obvious that she didn’t talk about it for another 30 years. (Here’s the video of the U.S. Women’s famous upset of the East Germans in the last women’s swim event, the 4×100 freestyle relay.)

But Ben Johnson getting caught in September 1988 was definitely big news at the time.

Another event related in time was the Sports Illustrated article “The Nightmare of Steroids” in SI’s October 24, 1988 issue by former U. of South Carolina player Tommy Chaikin in collaboration with sportswriter Rick Telander.

So by Halloween 1988, everybody in America with any interest in sports had heard of steroids. Canseco’s powerhitting Oakland Athletics went to the World Series in 1988, 1989, and 1990.

On the other hand, it wasn’t clear that American baseball players outside of Oakland were paying all that much attention. Homers plunged from 4458 in 1987 (an anomalously strong hitting year, perhaps due to a temporary change in the ball) to 3180 in 1988. They stayed down through 1992?s 3,038 homers (my impression is that the eruption of Mt. Pinatubo in the Philippines in 1991 depressed temperatures in America during the 1992 baseball season, hurting offense).

During the middle of the 1992 season, Canseco was traded to the Texas Rangers (co-owner George W. Bush claimed he signed off on all trades). In retrospect, that trade appears to have let the genie out of the bottle. The next season was an expansion year and so there weren’t too many surprises when power-hitting went up. But when it didn’t go down again in 1994, it was clear that something was going on, just like all the rumors said. (My source had told me in 1993 that “Jose Canseco is the Typhoid Mary of steroids.”)

But nobody was very interested in the reasons why homer-hitting was going through the roof.

In 1997, I co-authored a big article in National Review, “Track & Battlefield,” on how the use of artificial male hormones had temporarily narrowed the gender gap in Olympic running, but that the gap was larger in 1996 than in 1988 due to better testing. Baseball, of course, didn’t have any steroid testing until this century, so it was easier to pretend not to notice.

On the other hand, baseball’s avant-garde rebel sabermetricians, such as Bill James, were pointedly ignoring what was happening in front of their eyes. Of course, so were most of the old-fashioned baseball scribes. Curtis continues:

Baseball writers knew, right? They knew and they didn’t tell us. Well, by the mid-’90s, they knew something. But it was hard to square what they knew with what they could get past their editors.

Back then, before McGwire and Braun and Melky Cabrera, a scout would lean against the cage and nod at certain ballplayers. “See that guy?” he’d say. “He’s making my job hard.” Players like Frank Thomas and Tony Gwynn would complain loudly; Ken Griffey Jr. did the same, but usually off the record. But the players would hesitate to name their colleagues, and they had little evidence.

“It was truth without portfolio,” said Ratto. “It was quote marks, truth, close quote marks.”

“Everybody says, ‘You knew. You knew,’” said Richard Justice, who was the national baseball writer at the Washington Post. “I didn’t even know what there was to know.” Indeed, unless a baseball writer had covered the NFL or Ben Johnson in Seoul, he had little medical knowledge of steroids.

It wasn’t really that hard in 1995-1997 to research steroids. I did a huge analysis of steroids in track published in 1997 that I probably would have finished in 1996 except for coming down with cancer that year. And I had a market research job in 1996.

The story that took PEDs out of the realm of rumor was almost a sidebar. On August 19, 1998, Steve Wilstein of the Associated Press published 2,910 giddy words on McGwire and the home run chase. Three days later, he published an additional 1,113 words on a bottle of androstenedione he saw in McGwire’s locker. It was as if the two stories of 1998 — the home runs and the chemicals — couldn’t occupy the same real estate.

… Unlike most baseball writers, Wilstein had done several reporting tours at the Olympics. In Seoul, he tried to ask Ben Johnson for an interview days before the 100-meter final. “He roared at me,” Wilstein said. “I think he was on a ‘roid rage. He sounded like a lion.” A few weeks later, Wilstein heard the crowd chant STER-oids! at Canseco.

In 1998, STER-oids was rarely associated with McGwire in print. …

The strangest omission of the steroid era was reporters’ failure to write, “This doesn’t look right.” Instead, baseball writers played Word Power: “bigger-than-life,” “bulging,” “Bunyanesque.” (The latter was also used to describe McGwire’s heart.) “In retrospect, do I wish I and others had noted the bodies of McGwire and [Sammy] Sosa and written, ‘What the heck was going on here?’” said Rosenthal. “That would have been a fair column.”

“It did not register that something nefarious was going on,” said Boston Globe columnist Bob Ryan. “People say, ‘You overlooked it!’ No, I was stupid. … I’ll take naive and stupid over willfully evil.”

Lessons learned: To me, learning that was a major lesson about human nature that partially justified the immense amount of time I’ve frittered away on sports statistics over the decades, but most folks aren’t very interested in major lessons.