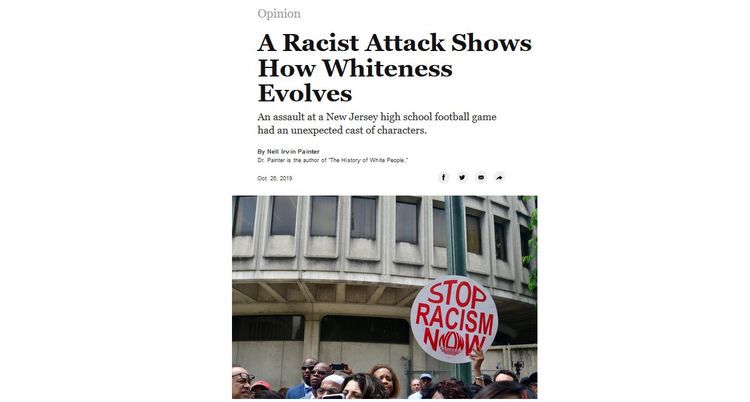 An assault at a New Jersey high school football game had an unexpected cast of characters.

By Nell Irvin Painter
Dr. Painter is the author of “The History of White People.”

Two 17-year-old boys accused of harassing four African-American middle schoolgirls — using racial slurs and urinating on one of the victims — are facing charges including bias intimidation and lewdness.

The incident, which took place during an Oct. 18 high school football game in the New Jersey suburb of Lawrence Township and was partly captured on a video that circulated on social media, involves a cast of characters that has given some observers pause: Police say the boys are of Indian descent.

American Indian or Asian Indian? I’m guessing the latter, but you’d think the NYT might consider that worth de-ambiguizing.

While it’s tempting to see the reported ethnicity of the boys suspected in the assault as complicating the story and raising questions about whether the assault should be thought of as racist, I look at it through a different lens.

Instead of asking what the boys’ reported racial identity tells us about the nature of the attack, we should see the boys as enacting American whiteness through anti-black assault in a very traditional way. In doing so, the assailants are demonstrating how race is a social construct that people make through their actions. They show race in the making, and show how race is something we perform, not just something we are in our blood or in the color of our skin.

At first blush, this reported assault sounds nauseatingly familiar, like the run-of-the-mill American racial harassment that has always been common but has become increasingly revealed thanks to videos shared on social media.

Like Jussie Smollett, Tawana Brawley, all those videos on World Star Hip Hop.

The boys’ actions resemble those of people who feel empowered to act out their resentment against nonwhite people who are deemed out of place, confronting them with hostility or slurs or calling the police. The people patrolling what they see as their spaces are often — but not always — white. The Yale sociologist Elijah Anderson calls areas that are policed in this way, “the white space,” even though the spaces in question are officially public. The experiences of black people accused of these purported infractions have acquired a panoply of names that capture the absurdity of facing such hostility while innocently carrying out everyday activities: driving while black, barbecuing while black, walking while black, sitting at home while black. The encounters often end with violent — too often, fatal — outcomes.

In the New Jersey incident, the heritage or skin color of the boys suspected of the assault doesn’t matter. What matters is that they were participating in this pattern and thus enacting whiteness in a very traditional way.

The way in which whiteness is labeled has changed over time, with relevant categories morphing from Teutonic to Saxon to Anglo-Saxon to Caucasian to Nordic to WASP to white to white-ethnic as the society changes, as politics change. As tempting as it is to assume that races are boxes that people fit in once and for all, that kind of thinking is too simplistic, too lazy to help us understand American history and culture.

Since the 1960s, some Americans from the Caribbean and Latin American have expressed that they don’t fit into the traditional black/white binary. At this point, we should wonder if or how other Americans might find places in the black/white traditions. Will Latinos of various skin colors come to consider themselves black or white? What about Asians of various skin colors?

To find out, we should observe their actions. Or how they perform race.

Multicultural New Jersey holds worlds enough to carry national, if not global significance — my state makes people from everywhere into Americans. Here, people of South Asian descent, like people from many other backgrounds, have skin colors that vary widely, from very dark to very light, and women are often subject to aggressive colorism. Further, they cannot be lumped together by class. The business pages of local newspapers feature powerful, wealthy men of South Asian descent and, at the same time, rush-hour NJ Transit trains include people of South Asian descent among the masses of working stiffs commuting to and from New York City.

For a clue on how American racial identity is evolving, it may be less useful to look to clues like complexion, and more to the performance of identity. The performance here — flinging around the N-word, with the befoulment of urination — holds an answer. One potent way of being American, no matter where you or your parents are from, is enacting anti-blackness. And traditionally, acting out anti-blackness has meant acting white.

Nell Irvin Painter is the author of “The History of White People.”

I generally don’t quote an entire article, but each and every word in this New York Times piece deserves attention.

As I’ve mentioned once or twice over the years, discourse is dumbing down to the childish question of Who Are the Good People and Who Are the Bad People?