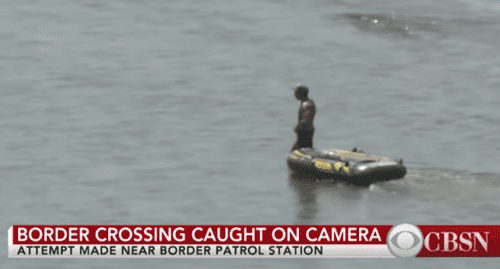 In South Texas, the Border Is Still Pretty Much Wide Open

Here’s a little news story from CBS, no less, that shows America’s perimeter is as unprotected as ever. Reporter David Begnaud was poking around Roma, Texas, down in the far south to do a story about the promised wall when he saw an illegal crossing of the Rio Grande in the middle of the day just a couple hundred feet from a port of entry. You can see the river is so narrow and shallow there that it’s easy to cross.

Below, the little raft is hardly needed by the illegal alien. 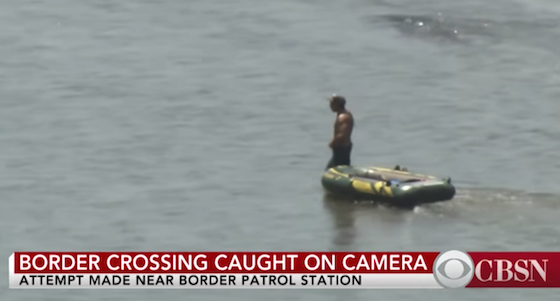 Any time you’re ready, President Trump, America awaits its border wall to protect it from the thieving Third World.

ROMA, Texas — As the Trump administration intensifies efforts to curb illegal immigration, attempts to cross the U.S.-Mexico border are continuing. A CBS News crew witnessed one of those attempts on Wednesday as a man in a raft tried to smuggle two people into the U.S. Their crossing, near Roma, Texas, was less than 100 yards from a port of entry where dozens of armed agents are stationed.

CBS News’ David Begnaud said he and his crew had gone to the border to work on a story about people receiving letters regarding the border wall that President Trump wants to build in the area. After stopping at a lookout point at the border, Begnaud and his producer drove over an international bridge that goes from Texas to Mexico, crossing over the Rio Grande river. They then parked on the Mexico side, along the water.

While there, Begnaud saw a man on a raft and began filming using his phone. Two other people in the boat appeared to be wearing life jackets.

As Begnaud recorded, a man speaking in Spanish — called a scout — told him and his producer that it wasn’t safe, and told them to leave. The scout, who was using a walkie-talkie to communicate with the smuggler in the boat, followed Begnaud and his producer to their rental vehicle, leaned on the window, and told them it wasn’t safe for them there.

Within about ten minutes, Begnaud and Hooper were back on the U.S. side of the river and the border. They then saw the man who was paddling in the raft walk across the river back to Mexico.

The incident highlights an ongoing issue that U.S. Border Patrol has been talking about: people swim or walk from Mexico to the U.S. across the Rio Grande river. What was surprising, however, was that it happened in broad daylight about 100 yards from the international bridge where dozens of Customs and Border Protection officers were stationed.