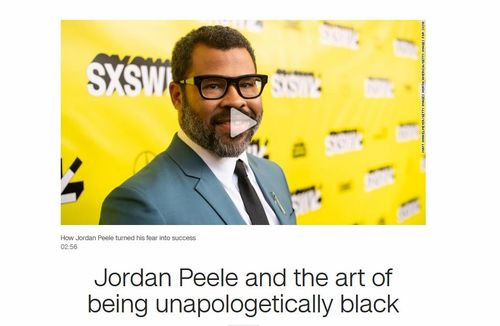 Jordan Peele: What The Hell Is 'Unapologetically Black?'

I didn't know who or what Jordan Peele is until this morning, thanks to a headline at CNN: "Jordan Peele and the art of being unapologetically black."

CNN explained that Peele is a "black nerd" who has mastered the cinematic horror genre, and explained that he "is among several successful creatives in Hollywood who are being unapologetically black in their craft."

Of course, you know the obvious question: Would CNN ever run a positive article about "successful creatives" anywhere, much less leftist Hollywood, "who are being unapologetically white in their craft?"

You know the answer. If there were such a person, CNN wouldn't be singing their praises.

On a lark, I googled "unapologetically white."

Guess what came back? All sort of bad things about some Bad Whites at St. Cloud State University in Minnesota identified, of course, as "white nationalists."

And tops on the search result is an offering from an "unapologetically black" writer who asked, writing at The Root, "What the Hell Is ‘Unapologetically White’?"

Fair enough. But "What the Hell is 'Unapologetically Black?'" And might it have something to do with black nationalists?