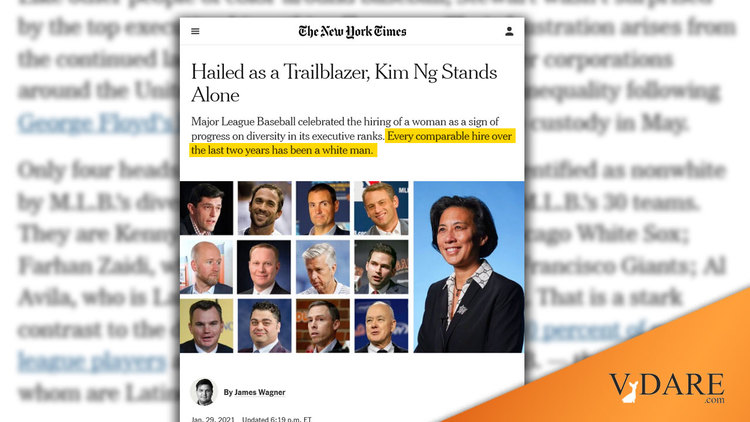 Back in the 1970s, bright white guys with no connections, like bean cannery night-watchman Bill James, started thinking harder than anybody else had ever thought before about the questions confronting baseball executives such as who to trade for which minor league prospects. There were increasingly few acceptable niches for white guys to hone their human pattern recognition skills, but baseball seemed like a Safe Space.

Nobody complained back when there was virtually no money in “sabermetrics” as the nerds developed their own intellectually exciting subculture.

But in the 21st Century, some of these nerds began to get hired for well-paid front office executive jobs by baseball teams to replace the baseball lifers who didn’t understand their new statistics.

That history has been celebrated in books and movies like Moneyball. But now we know better: the white nerds are bad guys. Why? Because, stupid, they are white. If whites were good, the New York Times would refer to them as Whites. But they don’t, so they aren’t. From the New York Times sports section:

Major League Baseball celebrated the hiring of a woman as a sign of progress on diversity in its executive ranks. Every comparable hire over the last two years has been a white man.

Kim Ng brought hope to baseball when the Miami Marlins hired her as the team’s general manager in November, making her the first woman and second person of Asian descent to run a major-league team’s baseball operations

Shouldn’t “Hope” be capitalized when referring to actions that hurt white men?

In a sport dominated by men — specifically, at the top, by white men

The very worst kind of men, let me remind you.

— Ng symbolized the potential for change. The civil unrest of last year was bringing a reckoning on diversity to many industries around the country, and it looked as if that reckoning would include baseball.

If George Floyd’s death doesn’t lead to fewer white nerds getting hired by baseball teams, then the fentanyl-abusing retired-stick up man was just another low life who came to an unsurprising bad end. And that would be intolerable.

For the rest of Major League Baseball’s off-season, Ng has stood alone. …

Like other people of color around baseball, Stewart wasn’t surprised by the top executive hires this off-season. Their frustration arises from the continued lack of opportunities, especially after corporations around the United States pledged to tackle racial inequality following George Floyd's killing while in Minneapolis police custody in May.

Only four heads of club baseball operations are identified as nonwhite by M.L.B.’s diversity goals — about 13 percent of M.L.B.’s 30 teams. They are Kenny Williams, who is Black, of the Chicago White Sox; Farhan Zaidi, who is of Asian descent, of the San Francisco Giants; Al Avila, who is Latino, of the Detroit Tigers; and Ng. That is a stark contrast to the demographics on the field, where 40 percent of major-league players are identified as nonwhite by M.L.B. — the majority of whom are Latino. …

Latinos of course contributed immensely to the development of sabermetrics, such as, uh, Guillermo Jaime and Natán Plata.