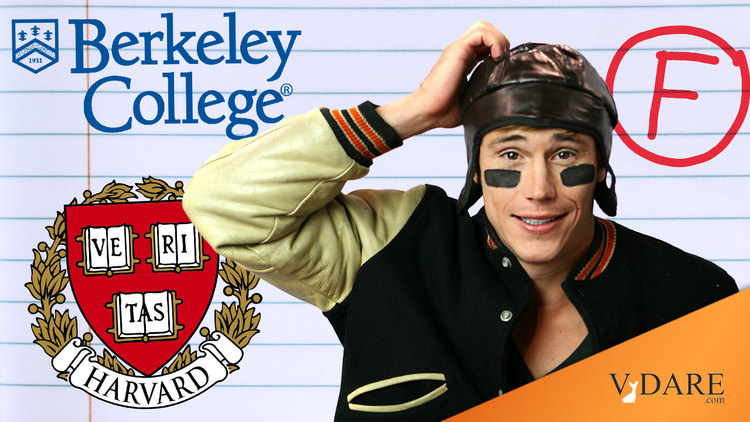 The Great Reset: Record Numbers Of Dumb Rich Kids Are Applying To Harvard And Berkeley

The University of Virginia drew a record 48,000 applications for the next class in Charlottesville — about 15 percent more than the year before.

Freshman applications to the University of California at Berkeley crossed into six figures for the first time, totaling more than 112,000, up 28 percent. Harvard University’s total spiked to an all-time high of 57,000. That’s up 42 percent.

The sudden explosion in demand for these and other big-name schools is another ripple effect of the coronavirus pandemic that could reshape college admissions for many years to come. The pandemic has given huge — and in some places, decisive — momentum to a movement to reduce or even eliminate the use of admissions testing at highly competitive colleges and universities. That, in turn, has lured more applicants to the upper tier of the market.

U-Va. and Harvard were among a large bloc of schools that temporarily suspended their requirements for SAT or ACT scores because the public health emergency prevented many college-bound students from taking the exams. Students could choose whether to send scores to these schools under a policy known as “test-optional.”

… Harvard said Friday it will be test-optional for one more year — covering those who are now high school juniors — and reiterated that those who do not submit scores “will not be disadvantaged in the application process.”

Assuming that in lieu of your test scores you submit a Jared Kushner-sized donation to the Harvard Development Office. Do you really think that if you don’t submit your test scores that Harvard will automatically assume you would have gotten perfect 800s? Harvard hasn’t been on top of the American college game since 1636 by being stupid.

Berkeley, on the other hand …

UC-Berkeley has taken a more radical step. It removed the SAT and ACT from admission decisions, a policy known as “test-free” or “test-blind.”

In other words, you are not allowed to submit your test scores to Berkeley.

A state court last fall ordered the UC system to apply that policy across all its campuses for this year’s applicants. The system’s approach to admission testing for coming years is still in some flux, but the UC governing board voted in the spring to phase out the SAT and ACT.

The plan is to ban the SAT and ACT now and in a few years introduce a brand new U. of California-devised nonracist test that has the same predictive validity as the old racist tests, but on which blacks and Latinos score as well as Asians. Why didn’t anybody ever think of inventing that before? How hard could it be?

… Application totals fell modestly at public universities with fewer than 10,000 undergraduates and at small private colleges that tend to admit most applicants.

There was also a 2 percent dip in applicants with enough financial need to receive fee waivers, and a 3 percent drop in those who would be among the first in their families to go to college. Jenny Rickard, president and chief executive of the Common App, said she was “very concerned” about those declines.

But the Common App found a surge of applications to schools with national and global reputations. At large public universities, including state flagships, totals rose more than 11 percent. At private schools with more selective admissions, they rose more than 17 percent.

In other words, lots of dumb kids from upscale families are trying to get into fancy colleges that they wouldn’t have bothered taking a flyer on when test scores were required.