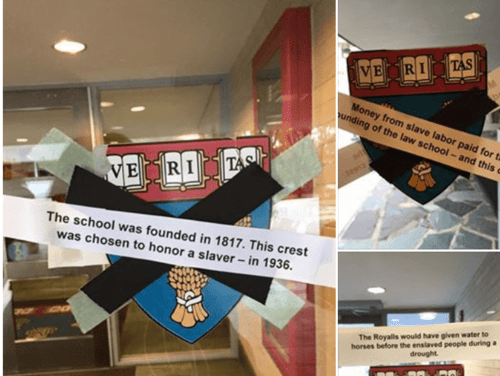 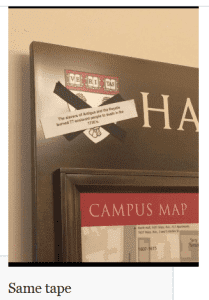 The working conditions for New York Times reporters these days are kind of dehumanizing. It must be humiliating for smart journalists to have to fit the facts into The Narrative, no matter how brain dead, and only be allowed to hint at what you figure really happened toward the end of the article when most readers have stopped processing hints.

CAMBRIDGE, Mass. — Black slashes of tape appeared across the portraits of some African-American professors at Harvard Law School on Thursday morning, outraging students and faculty members and touching off a day of discussion about racial injustice at the school.

In a statement, the school’s dean, Martha Minow, said that the portraits, which appeared on walls inside the building, had been “defaced” and that the Harvard University Police Department was investigating the incident as a hate crime.

“This is my portrait at Harvard Law School,” wrote Professor Ronald S. Sullivan Jr., on his Twitter account, along with a photograph of his portrait, with a wide piece of gaffer’s tape placed diagonally across his face.

An investigation is “active and ongoing,” the Harvard police said of the episode that had raised the specter of a hate crime at an institution that educated Barack Obama, as well as six current Supreme Court justices. That includes Justice Elena Kagan, who was dean of the law school, and who also has her portrait on the wall.

The news of the incident spread rapidly around campus, bringing a new sense of urgency to discussions about race and racial discrimination that have spread across this campus as well as universities and graduate schools around the country.

“I woke up to a bunch of texts,” said Kyle Strickland, the president of the law school’s student body. “As a black student, it was extremely offensive. And I know the investigation’s ongoing; we’ll see what happened, but to me it seemed like a pretty clear act of intolerance, racism.”

Seeking an immediate discussion about the issues, about two dozen students interrupted Ms. Minow’s constitutional law class. All students asked then, said Dami Animashaun, a third-year student, that “we talk about this,” adding that the school had reached a “tipping point.”

Shortly after noon, hundreds of students — as well as faculty members and administrators, including Ms. Minow — gathered for what the law school called a community meeting, filling one large room and much of another. …

But some students said the administration had not done enough to make the school fully inclusive of minority students and faculty members and voiced an array of concerns that ranged from the relatively low number of black professors — there are 12 black permanent full-time faculty members out of 125 — to the way the school taught law.

Harvard pioneered the “case method,” in which students read court rulings, and classes are a give-and-take of questions and answers. But that method, some students said, fails to account for how external factors, like race, might have affected a legal decision.

“We’re using this as precedent, we’re not being taught now to reverse these precedents, we’re just forced to regurgitate them,” a second-year student, Aya Saed, said.

In a twist, the black tape used on the portraits had apparently been used in an earlier protest, which sought to have the law school change its seal. Students had put the tape on mats displaying the seal to protest the inclusion of the family crest of a slave-owning family named Royall that they say was involved in brutally putting down a slave rebellion in Antigua. The family also owned slaves in Massachusetts and one member, Isaac Royall Jr., bequeathed part of his estate to Harvard, which was crucial to establishing the law school.

“It appears that whoever did this took the tape from those mats and used the strips of tapes from those mats and placed them on the black professors’ portraits,” said Alexander J. Clayborne, a third-year student here who has been involved in a campaign to change the law school’s crest. The student-led campaign called Royall Must Fall circulated an open letter Wednesday calling for a change in its seal. 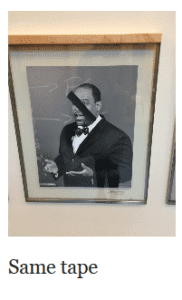 But that’s my job, NYT reporters: at least I’ll read your articles carefully and spell out your cries for help.

This article should come with a Jeremiah Denton-like video of reporter Jess Bidgood blinking in Morse Code H-O-A-X.

The Daily Caller doesn’t pay much compared to the NYT, but at least you don’t have to act like a chump in public. Blake Neff writes in The Daily Caller:

While activists on Facebook and Twitter are quickly denouncing the tape as a sign of the hate that lurks beneath the surface at Harvard, the possibility must be considered that the hate crime is a hoax or false flag. Bogus hate crimes have occurred with some frequency on college campuses.

One particularly noteworthy red flag is that the black tape used to deface the portraits appears to be identical to tape that was recently used by activists affiliated with the Royall Must Fall group protesting against HLS’s current seal (which is taken from the coat of arms of the slaveholding family that endowed HLS’s first professorship).

Royall Must Fall claims the tape is identical because it was used as a calculated retaliation against their earlier protest.

“What was an obvious educational art action placed on campus was retaliated against,” the group says on Facebook. “Cowards used the black tape from the educational art and defaced the portraits of the Black professors at HLS.”

But another possibility, of course, is that the same roll of tape was used in the first place. The Harvard Law Record’s write-up indicates the taped-over seal was noticed the same morning as the taped over faces, suggesting that the alleged hate criminal either retaliated extremely quickly, or else was responding to something so obscure it had gone unnoticed thus far.

Efforts to contact Royall Must Fall for more information were unsuccessful.