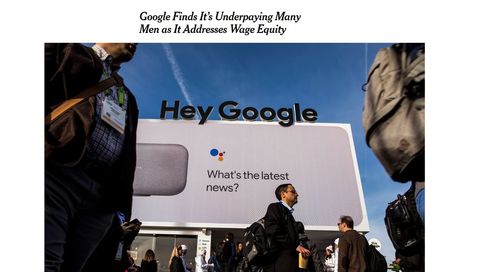 A survey of employee salaries at Google reached a surprising conclusion: More men than women were being underpaid. The company acknowledged that the analysis did not address broader issues of gender inequity.

Isn’t he a pitcher?

SAN FRANCISCO — When Google conducted a study recently to determine whether the company was underpaying women and members of minority groups, it found, to the surprise of just about everyone, that men were paid less money than women for doing similar work.

It’s almost as if the NYT’s regular correspondent on Silicon Valley discrimination issues, Claire Cain Miller, is a feminist propagandist rather than an objective reporter.

The study, which disproportionately led to pay raises for thousands of men, is done every year, but the latest findings arrived as Google and other companies in Silicon Valley face increasing pressure to deal with gender issues in the workplace, from sexual harassment to wage discrimination.

Gender inequality is a radioactive topic at Google. The Labor Department is investigating whether the company systematically underpays women. It has been sued by former employees who claim they were paid less than men with the same qualifications. And last fall, thousands of Google employees protested the way the company handles sexual harassment claims against top executives.

After all, after merely a half dozen years of media hysteria over how women and blacks/Hispanics were supposedly being discriminated against by Google, it came as a total shock that Google was paying the beneficiaries of this campaign more than they deserved.

It’s almost as James Damore was correct about Google.

… Google seems to be advancing a “flawed and incomplete sense of equality” by making sure men and women receive similar salaries for similar work, said Joelle Emerson, chief executive of Paradigm, a consulting company that advises companies on strategies for increasing diversity. That is not the same as addressing “equity,” she said, which would involve examining the structural hurdles that women face as engineers. …

In response to the study, Google gave $9.7 million in additional compensation to 10,677 employees for this year. Men account for about 69 percent of the company’s work force, but they received a higher percentage of the money. The exact number of men who got raises is unclear. …

Google’s work force, especially in leadership and high-paying technical roles, is overwhelmingly male and mostly white and Asian. Its efforts to increase diversity has touched off an internal culture war. In 2017, James Damore, a software engineer, wrote a widely circulated memo criticizing the company’s diversity programs. He argued that biological differences and not a lack of opportunity explained the shortage of women in upper-tier positions.

By the way, Damore is a good example of how Hans Christian Andersen was wrong about The Emperor’s New Clothes. Instead of the whole world realizing that the spergy young truthteller is right, the CEO just fired his ass.

iSteve commenter jimmyriddle pointed out the same thing happened last year at the BBC. From the Daily Mail:

BBC pay review branded a whitewash: More MEN than women will be handed salary rises by the Corporation after auditors found no gender bias despite 6.8 per cent difference in salaries

By KATHERINE RUSHTON MEDIA AND TECHNOLOGY EDITOR FOR THE DAILY MAIL

The BBC was accused of making the gender pay row worse last night as its report into the affair recommended giving pay rises to more men than women.

The long-awaited review, branded a whitewash by critics, also found there was no evidence of ‘gender bias’ when it came to setting pay, despite an avalanche of complaints from female staff earning less than their male colleagues.

And the corporation tried to explain away pay discrepancies for men and women doing the same jobs by saying male presenters were often paid more for ‘non-gender-related reasons’ – for example, because they are better known or more experienced.

Yesterday, female BBC staff said the verdict flew in the face of their experiences, and had only stoked their anger further. [More]

But did the data fly in the face of their Lived Experiences? That’s what counts these days.