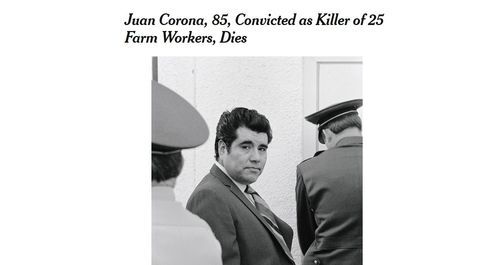 Mexican immigrants are stereotyped as not being very innovative. But one Mexican immigrant, Juan Corona, who died today at age 85, was one of the pioneers of one of the most heavily publicized Northern California-centered growth industries of the Seventies: serial killing.

Serial murder was barely a concept in American life before the Seventies. The 1971 discovery in Northern California of the corpses of 25 male fruit pickers apparently murdered by Corona came as confirmation that bizarre predecessors like the Zodiac Killer were turning into a genuine Social Trend.

Baseball statistician Bill James in his book on true crime claims that serial killing was quite rare in the United States until the end of the 1960s-early 1970s, when it took off. In fact, because policemen were trained to always assume the murder victim knew his or her killer, cops lagged public perceptions and didn’t really believe in the existence of serial killers until about 1980 when the huge publicity associated with Ted Bundy finally changed their mindset.

My impression is that serial killing in the U.S. has been in decline in this century, suggesting that the serial killing fad was a genuine emanation of the zeitgeist of fifty years ago.

Juan Corona’s life story is another example of the Extreme Vetting of immigrants. From Wikipedia:

Juan Corona was born in Autlán, Jalisco, Mexico in 1934.[1] He first entered the United States illegally in 1950. Crossing the border into California, the 16-year-old picked carrots and melons in the Imperial Valley for three months before moving on north to the Sacramento Valley. … On January 17, 1956, [Corona’s half-brother] Natividad had him committed to DeWitt State Hospital in Auburn, California, where he was diagnosed with “schizophrenic reaction, paranoid type.”

He received twenty-three shock treatments, before being pronounced recovered and released three months later. Upon his release, Corona was deported back to Mexico.

At this time, he stopped drinking. Aside from schizophrenic episodes and a reported violent temper, Corona was regarded as a hard worker. This same year, he became a licensed labor contractor. He was in charge of hiring workers to staff the local fruit ranches.

Corona reportedly was outwardly macho and had anger issues with homosexual men. His half-brother, Natividad, who was gay, owned the “Guadalajara Cafe” in Marysville. Early on the morning of February 25, 1970, a young man named José Romero Raya was brutally attacked with a machete in the restroom of the café. He was discovered by customers at 1:00 a.m., hacked about the head and face, and Natividad called the police. Raya filed a lawsuit against Natividad, winning a judgment of $250,000, which prompted Natividad to sell his business and return to Mexico instead of paying. The attack occurred after Raya rejected Natividad’s sexual advances.

In March 1970, Corona was again admitted to DeWitt State Hospital for treatment. A year later, in March 1971, he applied for welfare for the first time, as there was little ranch and/or farm work available. His application was denied, however, because he had too many assets, including two houses and some money in the bank.

On May 19, 1971, a farm owner who had used Corona to contract field workers noticed a freshly dug hole in his peach orchard.