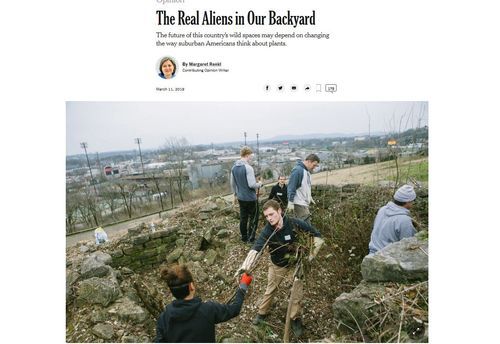 NYT: Down with Multicultivarism! Nativism Now!

For plants, that is. From the New York Times opinion page:

The Real Aliens in Our Backyard

The future of this country’s wild spaces may depend on changing the way suburban Americans think about plants.

… This kind of nature isn’t natural. Most of the plants now growing at the back of our lot aren’t native to Middle Tennessee. They’re native to other continents entirely. As aliens, they are poor food sources for our native animals and insects. A landscape populated by nonnative plants is, for wildlife, the equivalent of a desert. Worse, many alien plants are also highly invasive, choking out native plants and sending out their own seeds, some of which will settle and grow in wild places miles away from suburbia.

During summer, the easement behind my house looks as healthy and verdant as any natural place left to its own devices, but it’s nothing of the kind. The invasive plants are far too big for me to dig up, but I do my best to minimize the damage — cutting back buds before they can flower, pulling up seedlings, planting native trees and shrubs where I can. The project often feels Sisyphean.

This reminds me that earlier this month, one of the four giant Moreton Bay fig trees in the old Spanish plaza in downtown Los Angeles (next to Union Station, Olvera Street, and Chinatown) fell over after 140 years of life.

While royal palms are a symbol of Southern California to the rest of the world, residents tend to be less appreciative, since they provide negligible shade. They grow so tall so fast that they rapidly turn into the visual equivalent of giant telephone poles. Without craning your neck, it’s hard to see the top of a Los Angeles royal palm. You probably forget about it except during windstorms when their huge sharp fronds fall from 100 feet out of the sky and threaten to put your eye out.

In contrast, the Moreton Bay fig tree is likely the arboreal symbol of urban Southern California most admired by Southern Californians, since they can grow immensely wide. Kids like to play on their weird aboveground “buttress” roots. For example, on LA Weekly’s list L.A.’s eight most famous trees, two are Morton Bay figs.

The crown of the vast Moreton Bay fig tree in downtown Santa Barbara was measured in the 1990s as 176 feet across. Unfortunately, a couple of generations ago it became a rendezvous spot for the nation’s panhandlers who spread out across northern cities in summer, then meet up with their old pals under the Santa Barbara fig tree for the winter.

So I figured that the downtown Moreton Bay fig tree would simply be replaced by another one to restore the symmetry and the 140 year tradition.

But, the Moreton Bay fig tree is from Australia. It was introduced to Southern California during the, uh, multicultivarism fad around the beginning of the 20th Century. As soon as energetic Americans started to pour into the dusty pueblo of Los Angeles, they tried importing an immense variety of plants, many of which, with enough watering, thrived in the mild climate.

But now multicultivarism is out and nativism is in, so progressive opinion is calling for replacing the dead Moreton Bay fig downtown with a native oak or sycamore. I like those trees too, but still …