LOS ANGELES — Roughly 87 percent are white. About 58 percent are male. As many as two-thirds are at least 60 years old.

As the Academy of Motion Picture Arts and Sciences scrambles to address an outcry over a lack of diversity among its membership, a close look of its largest group, the actors branch, shows that ending the imbalance within its ranks might be more difficult than, say, predicting the annual Oscar winners.

The academy is typically reluctant to disclose the identities of its members and does not regularly provide demographic information about them. There is no set standard for membership and no consistency when it comes to how many people from the film industry are invited to join each year.

But an examination by The New York Times of the actors branch — whose more than 1,100 members control acting nominations for the Academy Awards — revealed the basic racial outlines of the group. Using public and private databases, The Times compiled data on nearly 1,100 acting branch members. Along with the white members, about 6 percent are black, under 4 percent are Hispanic and less than 2 percent are Asian. Women make up about 42 percent of the branch. A spokeswoman for the academy confirmed all of those percentages.

Of the 25 actors invited to join the academy last year, three were black and seven were women. The academy has stated that its aim is to double the number of minorities in its overall membership by 2020. Yet, as it tries to remake itself by recruiting younger and more diverse members and jettisoning those no longer active in the business, it is confronting new challenges. There are protests that it is being unfair to older actors, worries that it could simply be creating different diversity issues in the future and criticism from those within its ranks who do not want to use categories like race, age or gender as any kind of organizing principle.

Over the next five years, the academy would have to annually add about 14 black actors and at least nine actors who were either Asian or Hispanic to double the number of acting branch members in those ethnic groups. That would account for almost all of the slots if it invited 25 actors, which is how many were offered membership last year.

To attain gender parity among actors in five years, the academy could more than triple the number of annual admissions, to 80, while adding three women for every man. Assuming a typical annual attrition rate of about 26 people (largely because of death), the branch membership would be about 51 percent women by 2020, but women would then far outnumber men among the younger members.

There were 6,261 academy members throughout its various branches according to an annual tabulation it released on Dec. 14. Its official actors count — 1,138 voters, plus 126 academy retirees, who do not vote — may have been trimmed by recent deaths like that of Abe Vigoda.

Who else will step up to the plate and make the Ultimate Sacrifice for Diversity?

Perhaps the Academy could sponsor a (posthumous) Abe Vigoda Award to encourage members whose deaths would pave the way for greater Diversity?

Abe and some other white guys trying to act

On the other hand, Abe was 94 so his enthusiasm for the Cause was perhaps not as unquestionable as would be demographically necessary to achieve perfect Diversity any time soon. (In fact, one can picture Abe greeting each new year by cackling, “Those bastards want me dead. Well, screw ‘em, I’m still here!”) So maybe it should be called the James Dean / River Phoenix Award for Service to Diversity?

The academy is trimming its rolls, largely to limit voting rights to those who are active in the business. Last month, the academy said it would begin a year-round membership recruiting effort aimed at diversity, while also culling members who have not worked on a film for 10 years and have not been active during three separate decades since joining the academy. 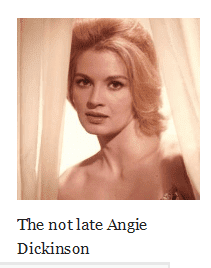 But it’s starting to dawn on the Brain Trust that, unlike Death, Disenfranchisement discriminates more against actresses than actors. Funny-looking character actors tend to have longer careers than lovely actresses. For example, Abe Vigoda earned a credit in a 2014 movie, which would have kept him eligible to vote through age 103, while Angie Dickinson hasn’t had a movie credit since 2004.

Already, however, there has been negative reaction.

“This is not the way to go about things,” Angie Dickinson, an actress who may be losing her vote under the new rules, said in an email. Ms. Dickinson, 84, whose career includes movies like the original “Ocean’s 11” in 1960, added that she had sent an angry missive to the academy.

It also appears that a reduction in the current voting members could result in more women losing their voting privileges than men, at least in the actors branch.

Based on credits on the IMDbpro.com database, which tracks both previous work and films in process — but is not fully complete or without error — more women, about 150, than men, about 135, on the academy membership list examined by The Times appeared to be in a position where their active status might be examined by the academy.