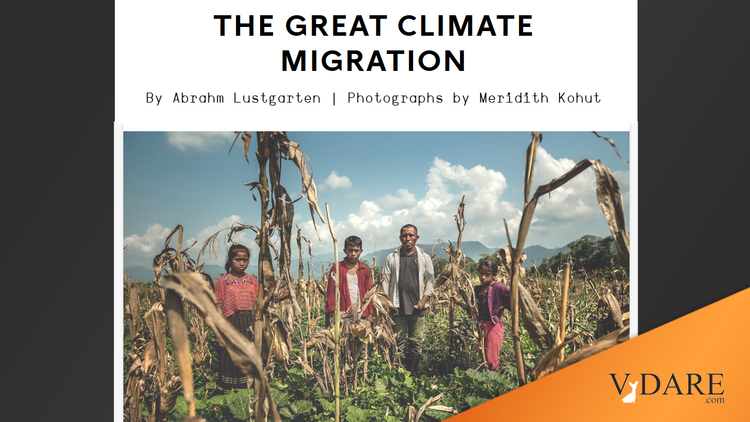 Today, 1% of the world is a barely livable hot zone.

Where will they go?

This article, the first in a series on global climate migration, is a partnership between ProPublica and The New York Times Magazine, with support from the Pulitzer Center.

… As their land fails them, hundreds of millions of people from Central America to Sudan to the Mekong Delta will be forced to choose between flight or death. The result will almost certainly be the greatest wave of global migration the world has seen.

For most of human history, people have lived within a surprisingly narrow range of temperatures, in the places where the climate supported abundant food production. But as the planet warms, that band is suddenly shifting north. According to a pathbreaking recent study in the journal Proceedings of the National Academy of Sciences, the planet could see a greater temperature increase in the next 50 years than it did in the last 6,000 years combined. By 2070, the kind of extremely hot zones, like in the Sahara, that now cover less than 1 percent of the earth’s land surface could cover nearly a fifth of the land, potentially placing one of every three people alive outside the climate niche where humans have thrived for thousands of years. Many will dig in, suffering through heat, hunger and political chaos, but others will be forced to move on. A 2017 study in Science Advances found that by 2100, temperatures could rise to the point that just going outside for a few hours in some places, including parts of India and Eastern China, “will result in death even for the fittest of humans.”

Death, I tell you, death! Your blood will boil in your veins.

People are already beginning to flee. In Southeast Asia, where increasingly unpredictable monsoon rainfall and drought have made farming more difficult, the World Bank points to more than eight million people who have moved toward the Middle East, Europe and North America. In the African Sahel, millions of rural people have been streaming toward the coasts and the cities amid drought and widespread crop failures. Should the flight away from hot climates reach the scale that current research suggests is likely, it will amount to a vast remapping of the world’s populations.

Migration can bring great opportunity not just to migrants but also to the places they go. As the United States and other parts of the global North face a demographic decline, for instance, an injection of new people into an aging work force could be to everyone’s benefit.

You see, it’s a Win-Win that the average woman in Niger on the southern edge of the Sahara averages 7.0 children:

Think of how they will envibrantize Silicon Valley.

But securing these benefits starts with a choice: Northern nations can relieve pressures on the fastest-warming countries by allowing more migrants to move north across their borders, or they can seal themselves off, trapping hundreds of millions of people in places that are increasingly unlivable. The best outcome requires not only good will and the careful management of turbulent political forces; without preparation and planning, the sweeping scale of change could prove wildly destabilizing. The United Nations and others warn that in the worst case, the governments of the nations most affected by climate change could topple as whole regions devolve into war.

The stark policy choices are already becoming apparent. As refugees stream out of the Middle East and North Africa into Europe and from Central America into the United States, an anti-immigrant backlash has propelled nationalist governments into power around the world. The alternative, driven by a better understanding of how and when people will move, is governments that are actively preparing, both materially and politically, for the greater changes to come.

Lie back, and think of how hot it is in Niger.

Alternatively, we could encourage tropical countries to have fewer babies. But that is unthinkable. The only thinkable alternative is to open our borders to the surplus population of the most backward countries on earth.

Last summer, I went to Central America to learn how people like Jorge will respond to changes in their climates.

And then this article goes on for many, many thousands of words, none of which are “altitude” or “elevation.” The only thing we are allowed to imagine if average temperatures go up is MesoAmericans changing their latitude … but not their altitude.

In reality, most Latin American countries have wide ranges in elevation. This altitude makes much of Latin America vastly more habitable than its latitude suggests at first glance. For example, Mexico City is at 7,300 feet elevation and in the hottest month, May, the average high temperature is 80 F / 27 C. The all-time record high temperature in Mexico City is 93 F. If the world gets a few degrees hotter, it’s not going to make most of Mexico unlivable.

In summary, there is a lot of room in Latin American countries for people to adjust their altitude rather than their latitude.

Other words not mentioned in this endless article: contraception, birth control, etc.

It’s almost as if the whole point is to flood America with the wretched refuse, just like they’ve been telling us.

The good news is that Latin Americans themselves have been waking up to the fact that they shouldn’t have more children than they can afford.

The bad news is that Africans have been much slower to catch on.