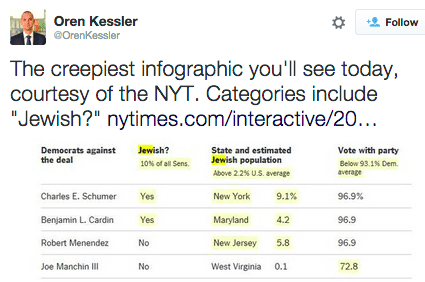 Many Times readers wrote to me Thursday about a graphic that appeared online and in print accompanying a story about the Iran nuclear deal. They protested a column in the graphic that identified whether lawmakers were Jewish, with a one-word heading: “Jewish?”

Typical of the objections was this one, from Jean Stevens of Los Angeles, who wrote to me: “Singling out Jews is reminiscent of horrific times in history.” And Jeffrey A. Carmel of Portola Valley, Calif., called the graphic “odious,” writing: “It certainly implies that these senators are somehow different from other lawmakers because of their religion. And, of course, the statistics on the percentage of Jews in their constituency further embellishes the suggestion that Jews are somehow different from other Americans.”

In addition, the graphic drew a great deal of negative reaction on Twitter:

Oren Kessler, by the way, is a deputy director of the Foundation for the Defense of Democracies, a neoconservative think tank dedicated to denouncing Israel’s enemies. Its biggest donor in 2001-2004 was subprime grifter Roland Arnall, one of the main architects of the Housing Bubble.

And Jonathan A. Greenblatt, the national director of the Anti-Defamation League, was another reader who complained in a published letter to the editor.

By early evening, The Times had altered the graphic online to remove that column, but did so without any explanation to readers. …

Here’s my take: The graphic, as almost everyone now seems to agree, was insensitive and inappropriate. I would add that it was regrettably tone-deaf. It shouldn’t have appeared in that form to begin with. Given that it did, Times editors took the right action in listening to the objections and changing it. But that change should have been accompanied sooner by an explanatory editor’s note. It’s appropriate that a note has been added now and while — given the fraught topic — it surely won’t satisfy everyone, I think it addresses the matter in a responsible and reasonable way.

Personally, I lost interest in the Iran thing a long time ago. Not because it isn’t important, but because in a world where many massively important issues are hushed up, I have much more useful things to devote my attention to than one that is, no doubt, getting its full measure of scrutiny.

If I were interested in having an opinion on the Iran deal, I’d probably want to know what Jewish Democrats in Congress think about it — presumably, bright guys like Chuck Schumer and Dick Durbin have heard a fair amount of argument about it — just as this handy table in the New York Times provides.

Obviously, nobody in our society except a few idealists is, in general, against counting by ethnicity and other identity politics categories. The New York Times, for example, constantly prints detailed statistics about how white males have too much power in Hollywood. In the press today, “white male,” for example, is an uncontroversial term of derision.

The federal government just sent me a letter demanding I participate in a trial run of the 2020 Census. And, of course, just like in past Censuses, a large fraction of the preliminary Census questions were about things like race and ethnicity.

But the federal government does not count Jews in any fashion. Jewish organizations protested Census plans to have “Jewish” as an answer on the 1960 Census.

The thesis is that Jews hate “Jew-counting.”

But the antithesis is that, of course, Jewish organizations and Jewish media put a lot of effort into counting Jews for the benefit of other Jews. For instance, here’s a headline in the Jewish paper The Forward from last spring:

Who the Jewish Billionaires Are Backing for 2016 Nathan GuttmanMay 21, 2015 Image: Anya Ulinich

The synthesis appears to be that Jewish special interest groups don’t want gentiles to possess any systematic information about Jewish numbers.

Thus, when activists like Oren Kessler see “Jewish?” as a column heading in a table … in the New York Times … they throw a massive hissy fit about its “creepiness” and get it deleted.

They can’t explain by any appeal to principle why it’s so horrible to use modern techniques of quantitative summary like … a table, but they can demonize tables as creepy like crazy to activate the Crimestop mechanisms in gentile heads.

Hey, you know who used tables? Nazis. Just sayin’ … It’s like those Hungarians putting refugees on trains or, you know, taking them off trains. Trains, man … Hitler used trains. And tables.

Systematic data on Jewish numbers aren’t supposed to be readily available to dumb outsiders. They’re not supposed to be able to easily find out that the reason so many Republican candidates at the debate practically sang choruses of “Israel Uber Alles” is because, even though there aren’t many Jewish Republican primary voters, about a third of all billionaires in America are Jewish and some of them are Republican donors.

Putting data in tables works against the natural, human desire of Jewish lobbies to have it both ways at all times: Jews are a tiny minority and thus should be pitied or, as the case may be, ignored; while at the same time, Jews are strong and should be feared and obeyed.

In response, for years, I’ve been posting Census Bureau data showing that Hispanics are big when it comes to qualifying for affirmative action (17.4% in 2014):

Granted, the tables of Census Bureau data I dig up about Hispanics numbers don’t get as much publicity as the contradictory claims of professional Hispanic activists. But the fact that I’m able to post tables and graphs of official government data on Hispanics showing that some of their claims to power are overblown and some of their rationalizations for privilege are underblown is gratifyingly irritating to the handful of Hispanic activists who play in my league.

In summary, my opinions are:

But then I’m a wacko extremist, so I would be in favor of knowledge.
[Comment at Unz.com.]