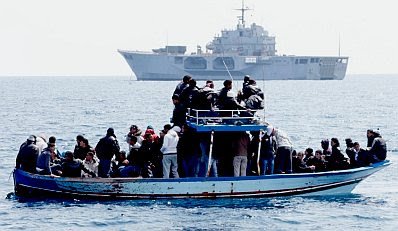 NYT: "Camp of Saints" and "Submission" Are Recipes, Not Cookbooks

Remember the old Twilight Zone episode about mass migration and how it turns out that the alien’s To Serve Man tome is a cookbook?

STRASBOURG, France — DURING the last seven decades, European countries have painstakingly tried to rebuild a continent once shattered by war and atrocities according to the values of solidarity and human rights. We built institutions to prevent the crimes of the past and we made a commitment to help those in need of protection.

This process has now gone awry. Europe’s current response to refugees shows unmistakable backsliding on that commitment. Immigration has become such a contentious issue that it is tearing apart what remains of the European project and its facade of solidarity.

… In Denmark, a populist party now holds the balance of power after running an electoral campaign on anti-immigrant rhetoric, including calls for stricter border controls.

Europe needs to take a long, hard look at itself — and at the reality of the refugee issue. … Laws that ensure a humane approach to the needs of migrants should replace provisions that criminalize migrants who enter and remain by irregular me

Nils Muiznieks is the Council of Europe commissioner for human rights.

Now, it’s like: Remember Raspail’s The Camp of The Saints and Houellebecq’s Submission? Well, those are recipes for Europe to follow!