G.K. Chesterton as the Houellebecq of 1914 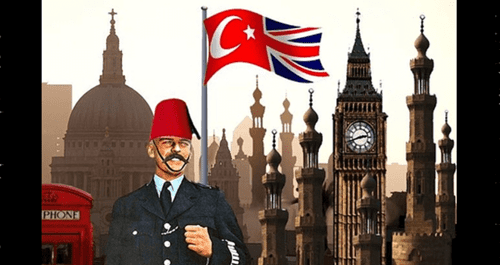 From Crisis Magazine, an article on the 100th anniversary of G.K. Chesterton’s novel The Flying Inn that sounds a bit like Michel Houellebecq’s current bestseller about France voting Islamists into power to keep out the National Front, Submission:

G.K. Chesterton had a knack for anticipating future trends but when, in his 1914 novel The Flying Inn, he anticipated the Islamization of England, it seemed so far out of the realm of possibility that it was difficult to take it as anything but a flight of fancy.

True enough, the book has a whimsical, Pickwickian quality. It follows the rambling adventures of two British stalwarts, Patrick Dalroy and Humphrey Pump, as they try to stay one step ahead of the law, dispensing free liquor as they go in an England where alcohol has been banned.

Chesterton, a convert to Catholicism and not exactly a man of ascetic, self-denying temperament (he was so fat at his death in 1936 that his coffin had to be lifted out of his second story window by crane), was presumably satirizing the Prohibition movement, which succeeded in Protestant America five years later.

… Roughly one hundred years later, Chesterton’s scenario no longer seems improbable. Many observers believe the Islamization of England is just a matter of time. For example, in her 2006 book Londonistan, Melanie Phillips presents a detailed description of the Islamic “colonization” of England now underway and shows how it is made possible by the governing class’ abandonment of cultural and spiritual values.

Chesterton was remarkably prescient not only in imagining that Islamization might happen, but also in envisioning how it would happen—through the instrumentality of a deracinated governing class. The reason that alcohol is banned in Chesterton’s tale is because some upper-class elites have become enamored of Islam and everything Islamic—including the prohibition of drink. Chief among these is Lord Ivywood, a Nietzschean diplomat who has enlisted the aid of a mysterious Turk, Misyra Ammon, to spread the new gospel among the jaded upper class who find exotic Islam to be more exciting than their own traditions and religion.

Among other things, the establishment of the new order involves a rewriting of history. As Ammon patiently explains to his sophisticated audiences, England was originally an Islamic country. This is evident, he says, in the existence of numerous pubs with Islamic names—“The Saracen’s Head,” for example—as well as in the English fondness for the word “crescent”—as in “Grosvenor Crescent,” “Regent’s Park Crescent,” and “Royal Crescent.”

Moreover, like today’s multicultural elite, Chesterton’s “smart set” are all too happy to hear that this exotic culture is superior to their own, and are quite willing to accept that virtually all scientific and technical discoveries were first made by Muslims. As one of the English characters puts it: “Of course, all our things came from the East…. Everything from the East is good, of course.”

One of the imports from the East is polygamy or, as Ammon calls it, the “Higher Polygamy.” No one is as yet practicing polygamy, but it eventually dawns on one of the young ladies in the story that this is the direction in which things are trending—that Lord Ivywood’s mansion is, in fact, designed to be a harem.

To Houellebecq, of course, polygamy is a feature, not a bug.

Not quite as astute, the other young ladies prefer to think, as Misyra Ammon tells them, “that women had the highest freedom in Turkey; as they were allowed to wear trousers.”

Chesterton was smart enough to realize that something like Islamization could not happen without a prior undermining of the existing culture. As Hal G.P. Colebatch observes:

Chesterton was original not only in seeing a then apparently down-and-out Islam was still a threat to Europe, but also in seeing that the Islamic conquest would not be possible without a preceding culture war to destroy the social agents of resistance, that Islam had a certain seductiveness for a type of jaded Western mind, and that the betrayers would not be the lower classes but the wealthy elite. …

Then, as now, part of the softening-up process is accomplished by employing politically correct euphemisms to hide plain facts. …

Chesterton’s prophetic novel hits uncomfortably close to home. One thing he didn’t anticipate, however, is that the final Islamization of England could be accomplished without importing a foreign army. Since modern England has already imported enough Muslim immigrants to engineer a significant cultural shift, an occupying army won’t be needed. Otherwise, Chesterton was right on target. He foresaw that an Islamic takeover would be facilitated by cultural elites eager to show their tolerance for new ideas and fashions and their corresponding disdain for traditional culture. In Chesterton’s day, the cultural elites were referred to as the smart set; today they are the multicultural and media elites. And, as in Chesterton’s story, they are quite willing to believe that Muslims discovered or invented just about everything under the sun. …

In the England of Chesterton’s imagining, polygamy was just a gleam in Lord Ivywood’s eye. Nowadays, for all intents and purposes, it is an institution. Although polygamy is still against the law, it is, in fact, a growing practice among Muslims of Great Britain. Instead of enforcing the law, culturally sensitive police and courts look the other way, and the welfare agencies do their best to provide material support. A Muslim man with four wives can expect a welfare check for each of them—and all signed over to his name.

Chesterton’s friend Hillaire Belloc was also unusual for the age in seeing Islam not as defunct, but as merely dormant.

Post
If Races Were Reversed In The Dog Park, The White Woman Would STILL Have Been Wrong...Because She's White

Post
From the Derbyshire Email Bag: Felony Murder, Nursing Home Attacker, And WHO Is Ferociously Hostile?