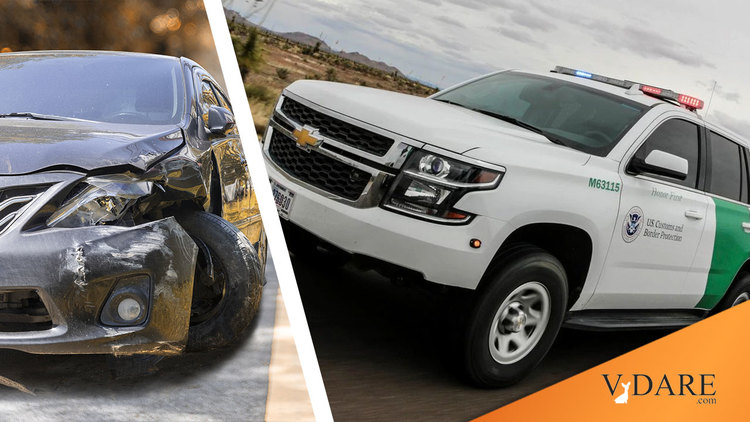 Below is an article from the New York Times that is reprinted in small town papers across the country: A Rise in Deadly Border Patrol Chases Renews Concerns About Accountability, by Eileen Sullivan, January 9, 2022.

The number of migrants crossing the border has soared. With that surge has come an increase in deaths and injuries from high-speed chases by the Border Patrol. https://t.co/Xqkebwypob

I cannot say that I read the article in its entirety, but skimmed through it. From the title alone, I knew it would be an Open Borders propaganda piece. The same technique was applied on the Southern Border during Trump's presidency. At the time, every person who died crossing the border was built up as a personal story of a tragic death (importantly) in Border Patrol custody! From the title alone, the reader gets the impression that the Border Patrol is beating illegal aliens to death. Of course, the reality was far different. One of the illegal aliens who died had actually been passed over to the Department of Health and Human Services and they paid for two brain surgeries on the alien in a desperate attempt to keep him alive.

Border Patrol Agents trained as paramedics actually revived the girl twice, but she was later pronounced dead at the hospital. The left exploits these deaths to vilify the Border Patrol and get what they truly are after—an open border. Another such article with a deceptive headline was Mexican national dies in U.S. Border Patrol custody [Reuters, Yucatan Times, February 19, 2019 ]. That would lead a reader to believe the Border Patrol was executing illegal aliens. This alien died of cirrhosis of the liver. (Perhaps the Border Patrol took him to one of their infamous cantinas and drank him to death?)

Going back to the Times' propaganda piece, there has been an increase in police pursuits since Biden's Open Borders agenda. Yes, a lot of illegal aliens are crossing, claiming political asylum and being released. However, a lot of single males who are travelling without kids fear they will be deported if caught. They make up the majority of the so-called gotaways. As a result, alien smugglers have still been trying to evade the Border Patrol and local police. In Texas, the Texas DPS has not backed off pulling over illegal aliens and turning them over to the Border Patrol. Not so surprisingly, the New York Times did not take a crash that resulted from a local police pursuit, but brought up one where the Border Patrol was involved. They also interviewed the smuggler's mother in order to get maximum sympathy for him. Who wouldn't feel sorrow for a grieving mother? However, it ignores that the supposed victim was an alien smuggler who was knowingly committing a crime and who when discovered chose to flee at high speed from the Border Patrol. The individual hard luck story is important in gaining sympathy for the idea of an open border.

I'm positive the Agents did not intentionally cause his death. If you have any idea of the amount of paperwork involved and the scrutiny the Agents will be under, then you would know they were likely mortified at the scene of the accident. Plus, the Biden administration is willing to go after Agents who supposedly whipped Haitian illegal aliens. If they are willing to vilify Agents for riding horses, do you think they will give Agents involved in a high speed pursuit a fair hearing? On top of that, most Agents are actually human beings and grieve when people lose their lives. The stories of the individual Agents will not be presented in the Times except to vilify them.

Of course, this wouldn't have happened if we didn't have a border with Mexico and everyone could cross whenever they wanted to, which is what the New York Times and the ACLU are actually after.