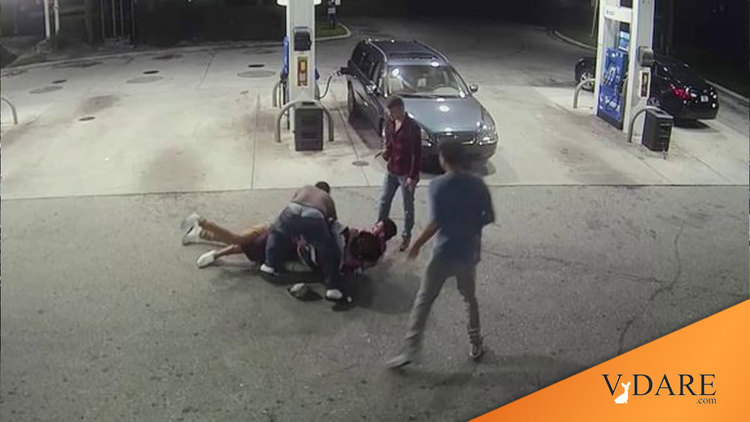 Life For White People In Atlanta, America’s Black Mecca: Police Officer Offers Tips How Not To Get Robbed By Blacks As You Fuel Up Your Car At Gas Stations

How much more evidence do you need to understand America, post-1964 Civil Rights Act, is a failed state? When pumping gas in Metro Atlanta is no longer a safe activity, because of the threat of being the victim of black violence, it’s time to reassess every long-held myth of white supremacy, white privilege, systemic inequality, implicit bias, food deserts, heat islands, shade inequity, and the legacy of Jim Crow holding down black people.

After a string of violent incidents at gas stations across metro Atlanta, a Lilburn police officer is giving tips on how to stay safe while fueling up.

Cpl. Mike Johnson said in a Tuesday Facebook post that although crimes at convenience stores and gas stations are not new, they are becoming increasingly more violent.

On July 10, Bradley Coleman, 29, a former Peachtree Ridge High School coach was killed during a botched carjacking at a Gwinnett County gas station. Coleman was putting air in his tires at a Peachtree Corners QuikTrip when three men pulled up next to him and attempted to steal his car. Coleman was shot while trying to stop the suspects. David Jarrad Booker, 20, of Stone Mountain, was arrested on charges of felony murder and aggravated assault in the incident.

“These are target-rich environments (and) people are looking for a crime of opportunity. And one of the things that they’re looking for is risk versus reward if they can get in and out,” Johnson said in a phone call with The Atlanta Journal-Constitution.

In the Facebook post titled “Don’t Become the Hunted,”Johnson said people can become targets when talking on the phone and not paying attention to their surroundings.

“Gas stations are like a community’s watering hole. Everyone has to go to them eventually,” Johnson said in the post.

Johnson offered tips for staying safe at the gas pumps:

Johnson said if someone approaches and tries to take your vehicle, let them take it.

“It’s not worth your life to resist. They will get caught! Toss the keys in the opposite direction you plan to escape,” Johnson said in the post.

Johnson hopes these tips will help people feel safer when getting fuel.

“It’s easy to say it’s not going to happen to me,” Johnson said. “But it can absolutely happen to anybody.

Life in the Black Mecca. Police are now instructing white citizens how to survive a carjacking as they simply try and fill their gas tanks.

Is it any different for white people than what they face in post-Apartheid South Africa?

We don’t have to live like this. We really don’t.