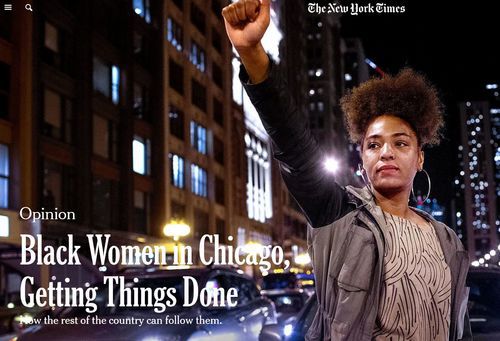 Black Women in Chicago, Getting Things Done
How the rest of the country can follow them.

A demonstrator blocking an intersection in 2015 after the shooting of Laquan McDonald in Chicago.

Well those demonstrators certainly got things done in Chicago in 2016, as measured in incremental numbers of dead bodies of blacks murdered by other blacks. The total number of homicides in Chicago increased from 512 in 2015 to 808 in 2016.

By Salamishah Tillet
Ms. Tillet is a co-founder of A Long Walk Home, an organization based in Chicago that uses art to empower young people to end violence against girls and women.

On Monday, Chicago will make history when Lori Lightfoot becomes the city’s first black female mayor. This victory sits alongside other firsts: her recent runoff against Toni Preckwinkle, a black woman and the president of the Cook County Board of Commissioners, and the 2016 election of Kim Foxx, a black woman, as the city’s top prosecutor.

When did we hear the name of Kim Foxx recently? Hmmhmmh, for some reason, the NYT op-ed doesn’t mention her recent foray into the national news. In contrast, iSteve has not stinted in 2019 on Kim Foxx Coverage:

In other news, the New York Times is changing its slogan from “All the News that’s Fit to Print” to “Yass Kweeeeennnnnn!”