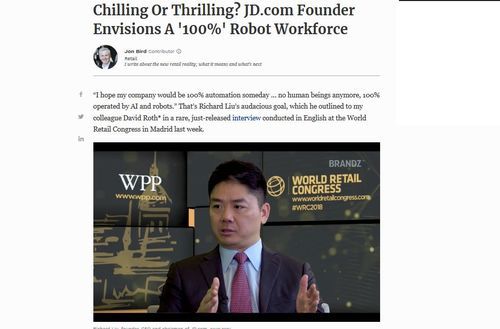 Automation In China: Only Four Humans Work in Automated Warehouse

Monday’s Washington Post has an interesting report about a roboticized warehouse that requires just one human to keep an eye on things. Perhaps the Post thinks it’s less edgy to portray Red China as being a heartless job-killer than to show the same thing in this country.

In a facility where “most workers have been rendered obsolete,” the chief executive Richard Liu declares, “I hope my company would be 100 percent automation someday.”

Most western executives are less blatant about how they intend to abolish their expensive employees to save costs, but none of the big brains have explained how a future economy is supposed to work without customers to buy the more cheaply produced consumer goods. Because without paychecks, there are no shoppers.

Richard Liu is known in the People’s Republic as Liu Qiangdong. His company JD.com is one of the leading e-commerce industry leaders in China, so his industrial choices do not go unnoticed. Anyway, whenever machines become less expensive than human workers, the switch will happen because of basic market forces.

JD.com plans on an automated future as shown below. 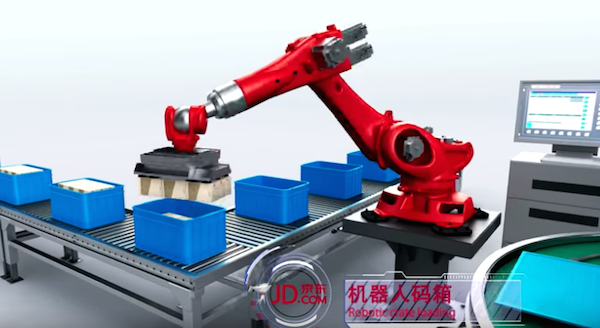 There is not a lot that can be done in the face of the automated future, but it’s crazy to continue importing immigrant workers who will soon be totally unnecessary, even at their lower cost.

The Post article was reprinted in the Tulsa World, posted below:

He’s one of the only humans at work in a Chinese warehouse with only robots for company — and he loves it, Washington Post, September 10, 2018

SHANGHAI — Inside a warehouse the size of seven football fields, hundreds of robots pack roughly 200,000 boxes each day and ship them to customers across China. Four humans babysit.

One is Zou Rui, 25, a soft-spoken engineer who stands for much of his eight-hour shift in New Balance sneakers, monitoring a milky white mechanical arm. It plunges up and down like a pecking chicken, grabbing parcels with a suction-cupped hand and dropping them into containers on a conveyor belt.

If something looks odd, Zou rushes to fix it. Otherwise, he said, he jots notes in a binder, tracking the arm’s performance for his remote bosses. Or he chats online with his colleagues: two men and a woman, all about his age.

Here, Zou is far from his family’s cornfields in the eastern province of Anhui, far from the bustle of his old workspace with 100 or so people. But he doesn’t feel isolated.

Zou works for the Chinese e-commerce giant JD.com, which lauds this warehouse on the outskirts of Shanghai as one of most automated in the world. Analysts say it’s a peek at the future of manual work in China and beyond — a place where a chosen few tend to the machines, while most workers have been rendered obsolete.

Thanks to a “strategic partnership” with Google, that future could be coming soon to the United States.

But chief executive Richard Liu wants to take the high-tech concept even further in a country once known as a hub for cheap labor.

“I hope my company would be 100 percent automation someday,” Liu said at an April retail conference in Madrid. “No human beings anymore.”

His facility near Shanghai serves as a learning lab for the company — which reported a slim $18 million in profit last year on revenue of $55.7 billion. Executives hope it will prove to be a not-so-secret weapon against competitors Alibaba and Amazon, which are also racing to develop the next generation of e-commerce super machines.

While in the United States on a business trip, Liu was arrested Aug. 31 in Minneapolis on suspicion of rape. He was released, and no charges were filed. Liu returned to China, and JD.com issued a statement Sept. 5 claiming that Minneapolis police found no misconduct by Liu. The police investigation, however, remains open.

JD aims to perfect its technology, spread it to the firm’s 500-plus other warehouses across China, Thailand and Indonesia, which still depend on thousands of people, and eventually sell the system to businesses that want to shrink their own labor costs.

As of today, JD employs roughly 160,000 full-time workers in Asia. Over the next decade, Liu said, he hopes to see that number dwindle to “less than 8,000” better-paid staffers who work two or three hours daily.

The jobs would be “easier, more fun and less dangerous,” the company head said this spring.

While people still outperform robots on a range of tasks — lifting objects of various shapes and sizes, for example — economists predict that JD and other e-commerce businesses are leading a shift that will displace millions of workers worldwide in retail and manufacturing.

“This is the kind of technology I expect will disperse everywhere,” said Martin Ford, author of “Rise of the Robots,” which explores how artificial intelligence could reshape the labor market. “It’s absolutely inevitable that this will be a lot more disruptive than people imagine.”

A swath of jobs that follow patterns will vanish, Ford said — the global consultancy McKinsey predicts that robots could replace almost a third of the American workforce by 2030 — and a new crop of highly skilled positions will emerge. (Continues)