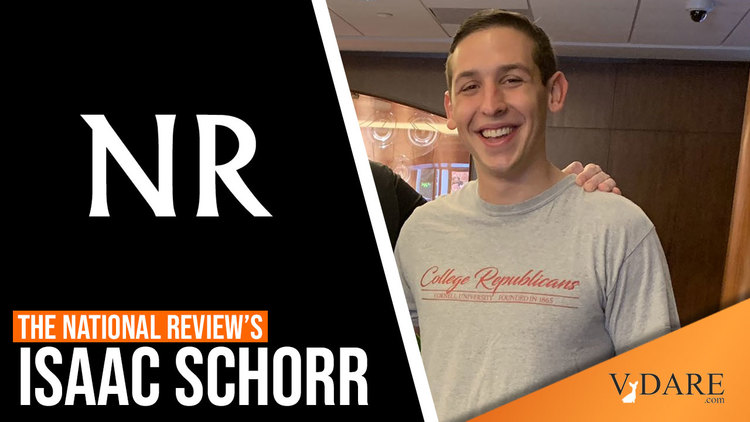 NRO's Isaac Schorr is one of the extremely young people National Review Online hires to bring their whatever-generation-that-is perspective to grownup conservative issues.

So grateful for the chance to bring @DavidAFrench back to Cornell. It’s not every day that you get to host your favorite writer and thinker. Thank you to @yaf for making it possible and to Mr. French for making such a compelling case for such a consequential and besieged cause. pic.twitter.com/ceKTICUzyw

Schorr's latest is an attack on young patriotic immigration-reforming conservatives who aren't in the NRO mold, and who consort with forbidden conservatives, usually people who've been in the conservative movement, and in some cases writing for National Review (famous for its regular purges) before he was born.

In this one, he casually smears VDARE.com as "white supremacist", which is sort of the same thing we're suing the New York Times for.

He doesn't like the group College Republicans United  [CRU ]

CRU is a splinter group and “independently established America First organization” with a mission of “educating members on the importance of traditional values, practices, and mindsets.” Expressing discontent with the “neglect” of the national College Republicans National Committee (CRNC) umbrella organization and “qualms” with the state federation, the U of A board on which Zhang serves resolved to move “away from the ‘do nothing’ politics of yesteryear.”

Lest you dismiss the differences between CRNC and CRU as superficial, consider that CRU cites Lauren Witzke — the failed Delaware Senate candidate who granted an interview to the white supremacist website VDARE — and self-proclaimed “mommy” of the white nationalist “groypers,” Michelle Malkin, as its top two listings under the testimonial section.

Trump proved that in 2016, and we intend to keep proving it.