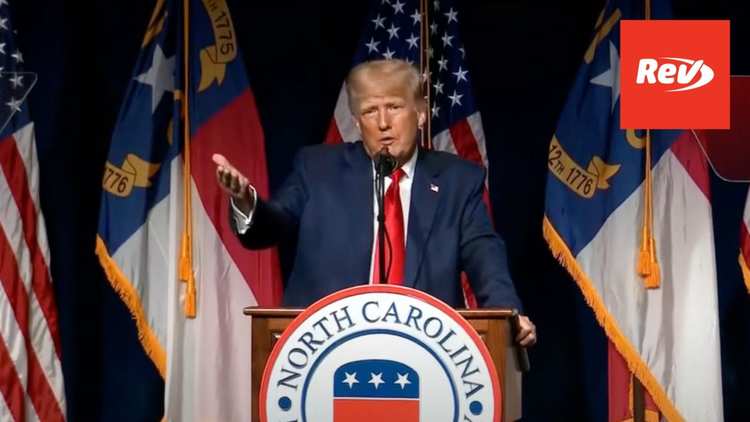 This is from Trump's North Carolina speech, the sections that mention immigration, rather than the other stupid things the Biden Administration is doing. Transcript courtesy Rev.com.

Good strong stuff that got him elected in 2016, and the lack of which cost him the 2020 election, which for any Republican needs to be won beyond the margin of Democratic fraud, which is always a factor.

Unfortunately, he does not mention reducing legal immigration, or an immigration moratorium:

You look at our border, is wide open. Illegal immigration is skyrocketing at a level that we’ve never seen before, and this is over a period of a few months. Drugs are pouring in.

And they stopped it. Now I understand they’re starting it again. That one was just too easy, but wait till they find out, hey, wait till they see what those contractors are going to do to them. Well this is going to cost us five times more money now because we weren’t prepared. It’s the old story. They’re the greatest negotiators in the world. They may not have gone to the greatest business schools, but they’re the greatest negotiators. But we negotiated historic agreements with Mexico, Honduras, Guatemala, El Salvador, to stop illegal immigration. We ended asylum and asylum fraud. The fraud of what was going on at our border was unbelievable. We instituted rapid removals on the border and that’s really rapid. I call it one day turnaround of criminals coming into our country, sending people home in record time. We have times that nobody ever heard of before. We ended catch and release.

That’s where you catch somebody, could be a horrible criminal. You catch somebody, a rapist, a murderer, could be a drug dealer. And we release them. It’s called catch. We catch them and we release them into our country. Well, we didn’t do that. We empowered ICE to do their jobs. ICE is incredible. The border patrol is incredible. By the way, your police force in North Carolina, I’ve gotten to know very well. They are incredible. Thank you very much. A lot of them are here tonight. We cracked down on sanctuary cities, deported gang members by the thousands, and dealt a crippling blow to MS-13, that’s the most vicious gang of all. And we took them out of here by the thousands. Thousands and thousands brought back to where they came and those countries didn’t want them back. And a little story. I said, “Well, what do you mean they don’t want them back?”

They weren’t taking them back. They didn’t want them back. They sent them out. They didn’t want them back. And I said, “That’s bad.” And they told me that, “Sir, we can’t take them. They won’t let us land planes. They’re putting other planes on the runway. So we can’t land planes. They won’t take the buses.” I say, “How much do we pay those countries?” “Sir, we pay them $500 million a year.” “Oh, you do? Tell them we’re not paying them anymore.” And the next day I got a call from all three countries. “We’d love to have Ms-13 back. We think they’re wonderful people. We never had a problem.” And now they blew that one too. They blew that one too. I’ll never forget it. “We’d love to have them back. It would be a great honor to take them back.” Those runways opened up like you’ve never seen anything open up.

After we instituted these policies, the number of illegal aliens coming across our border declined by an astounding 91%. But under Joe Biden, illegal crossings are up nearly 1000% compared to the same period last year. They’re emptying their prisons. They’re sending murderers, drug dealers, human traffickers, and others just as bad to the United States. Let the United States take care of them. Remember it’s called America last. In April alone, over 175,000 illegal aliens were apprehended and mostly released. You know where they were released, right? They were released into our country and we saw the largest number ever of unaccompanied minors. We’ve never seen anything like it. If you just watch some of the semi-fair tell. You don’t have to watch fair, semi-fair. They talk about it. Because I think they have no choice and I think they’re going to see it more and more.

You don’t see it too much on the evening news yet, but you’re going to see it because they’re destroying our country, but it is much worse than that because there are at least 1000 aliens who are simply getting away every single day as the radical Democrats have intentionally, ruthlessly, and systematically dismantle the sovereign borders of the United States of America. We have people just walking into our country. Nobody knows who they are, where they’re from. There’s no vetting, there’s no anything. And some of these people are very, very bad people, much as I said on that beautiful morning when I came down with our future first lady at the time, Melania, who sends her regards. But we came down that beautiful gold escalator in Trump Tower and I made that statement and people hated it. It turned out that my statement was very minor compared to the actual facts.

It was very, very minor. It’s another thing we were right about. Without a border, you cannot have a nation, certainly not a great nation. We fight for other country’s borders, but we don’t fight for our own border. Think of it. We fight for other country’s borders, but not for our own. That changed under my administration but now they’re going back more rapidly than anyone ever thought possible. Nobody ever thought that they could do this kind of destruction to our country so quickly. Some of those executive orders that are signed are absolutely insane. Biden has halted wall construction, suspended removals, and even removals of just horrible, horrible people, stopped enforcement, shredded our groundbreaking remain in Mexico. So we had that groundbreaking plan that took us a long time to get, because Mexico, like the other countries, were taking advantage of the United States. Everybody was taken advantage of us and we have an agreement. Stay in Mexico as opposed to stay in the United States.

And a lot of people weren’t coming when they realized they had to stay in Mexico. So the enforcement was so much better and it was getting to a level that nobody’s ever seen. And then we finally hit that level. Nobody’s ever seen anything like it. They turned America into a sanctuary for criminal aliens and effectively, they were abolishing ICE through agency directives. What they’ve done to ICE and what they’ve done to our border patrol heroes is incredible. It’s incredible. And these are some of the finest people you’ll ever meet. I got to know so many of them and they’re among the finest people you’ll ever, ever meet. It’s true. They love our country. Despite the worst border crisis in history, we’ve

recorded. 92% of illegal aliens we removed in 2020 had criminal records. You believe that? Over 90 and very substantially probably higher than that. I think around 92% had criminal records. Now, they’re all being set free and released back into your communities. They don’t want to bring them back. If they are back, they actually have a new policy that, if we took them out, they’re going to let them come back in. It’s the most incredible thing I’ve ever heard.

But the border is just the beginning of the Biden disasters.