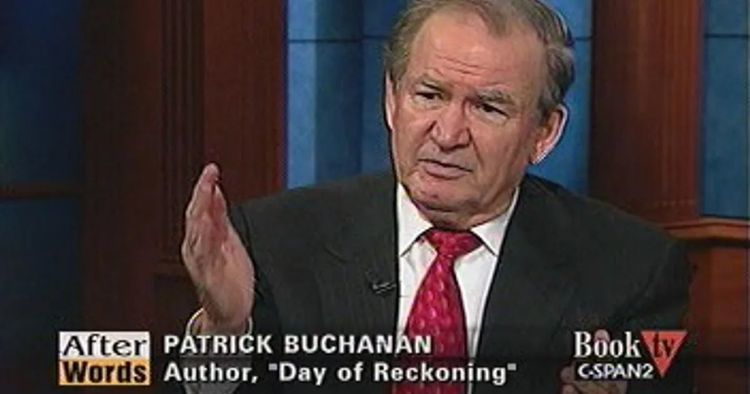 This the review of Pat Buchanan's new book, and the reviewer is Peter Wehner, [send him mail] a former executive assistant to George W. Bush, a

Peter Wehner on Day of Reckoning on National Review Online
Good Morning, Patrick!
Reports of our decomposition are premature.

The man who authored The Death of the West has now turned his considerable spirit of despair to America. Patrick J. Buchanan has written Day of Reckoning: How Hubris, Ideology, and Greed Are Tearing America Apart.

According to excerpts posted on The Drudge Report Monday, Buchanan writes, ”America is coming apart, decomposing, and …. The likelihood of her survival as one nation … is improbable…” He adds, ”America is in an existential crisis from which the nation may not survive.” Our culture is collapsing, according to Buchanan, and we face a perfect storm of crises.

Wehner goes on and on about how wonderful everything is, compared with, specifically, the period of the 1990's, and how there will soon be as few murders in New York as there were in 1963. He also mentions an article that he and Yuval Levin recently published in Commentary Magazine, Crime, Drugs, Welfare,  and Other Good News, [December 2007]

You may be less interested in the issue of neoconservatism vs. paleoconservatism than VDARE.com's writers are, but take a look at Peter Wehner's curriculum vitae:

Mr. Wehner served in the Reagan and George H.W. Bush Administrations prior to becoming deputy director of speechwriting for President George W. Bush in 2001. In 2002, he was asked to head the Office of Strategic Initiatives, where he generated policy ideas, reached out to public intellectuals, published op-eds and essays, and provided counsel on a range of domestic and international issues.

Prior to joining the Bush Administration, Wehner was executive director for policy for Empower America, a conservative public-policy organization headed by William J. Bennett, Jack Kemp, and Ambassador Jeane Kirkpatrick. Mr. Wehner also served as a special assistant to the director of the Office of National Drug Control Policy and, before that, as a speechwriter for then-Secretary of Education Bill Bennett.

Given that kind of CV, it's obvious that you would only give a guy like that a Pat Buchanan book to review if you really didn't like Pat Buchanan. Remember what I said, on the front page today, and also here, about us being the alternative to National Review? This is another reason why. And it's one more reason that we need to ask you to send money.