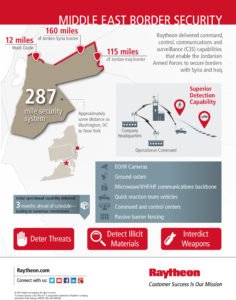 The Great Wall of Jordan: How the US Wants to Keep the Islamic State Out

… The Obama administration is spending close to a half a billion dollars to build a sophisticated electronic fence along Jordan’s northern and eastern borders, a wall which US strategic planners hope will stem the flow of refugees and also wall off the increasingly important American base from the disintegration of Syria and Iraq.

The wall, which began as a $20 million project in 2008 to erect a set of surveillance towers along a 30-mile (50 km) stretch of the border with Syria, has since expanded into a program costing half a billion dollars, according to defense officials who spoke to VICE News. Called the Jordan Border Security Program or JBSP, the wall is ostensibly meant to stop weapons of mass destruction from getting out, but since 2013 has refocused on detecting Islamic State fighters and arms smuggling, as well as refugees, on both sides of the border.

When completed later this decade, the border wall will have a camera-studded high-security fence, plus a network of ground sensors and a set of fixed and mobile surveillance towers that will be able to see and detect activity five miles away on either side of the fence. The entire system funnels into a joint US-Jordanian command center, where the United States also shares additional intelligence with Jordan about external threats to the kingdom.

The first phase of the JBSP, the erection of the towers, was completed in September 2009. Phase 1B, the beginning of the fence, was completed in March 2014. Phases 2 and 3, the building of a fully integrated and networked fence running along a 275-mile(442 km) stretch of Jordan’s borders with Syria and Iraq and costing some $300 million, are scheduled to be fully operational this year. Further phases will extend the fence along the entire border and improve surveillance and detection gear. Mobile surveillance stations and quick reaction forces will be stationed at vulnerable points or emerging hot spots.

It’s all paid for by the United States taxpayer. The JBSP is loosely part of a wall-building program to stop weapons of mass destruction sponsored by the Defense Threat Reduction Agency, focused not just on Jordan but also on the borders of Turkey, Iraq, and Lebanon. Raytheon Intelligence, Information and Services of Tucson, Arizona, a division of the Raytheon Company — one of the largest US defence companies — is the prime contractor.

Kenneth A. Myers III, who heads the United States Center for Combating Weapons of Mass Destruction, told Congress last year that “the system is designed to detect a person from five miles away and provides the Jordanians with a capability to safely detect, inspect, and apprehend someone suspected of smuggling WMD,” he said.

If you’ve never heard about the Jordan wall, it is because — despite its position at the physical center of the US war with the Islamic State group — the official position of the Jordanian government is that there are no US troops in the country, much less US military bases.

So, while official U.S. policy is that Jordan can use the fence we are building them to successfully keep out fanatical ISIS suicide WMD smugglers, yet, as we’ve all heard, American can’t use a 50 foot fence to keep out illegal aliens because they are armed with 51 foot ladders, as former Homeland Security head Janet Napolitano pointed out in her Nobel Prize-winning research in theoretical physics. While ISIS suicide bombers can be stopped by a wall, it’s a law of nature that Guatemalan stoop laborers will always get through.

And Jordan got America to pay for its wall.