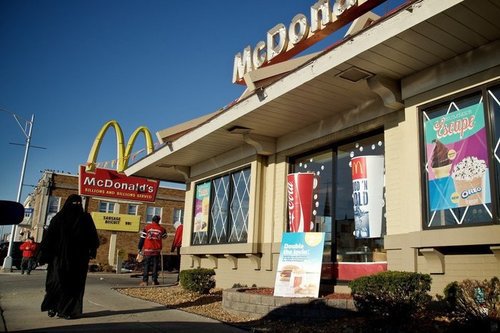 A century ago  Hamtramck was the destination of many Polish immigrants, which affected the city's culture in various ways.   Labor Day  is known as "Polish Day", there's a Polish-style cathedral  and a city councilman  back in '40s and '50s  was the cousin of then-future Pope John Paul II.  The city was even referred to as "Little Warsaw".

Now, of course, life is changing, and everybody is not happy about it. Even Mayor Karen Majewski  expresses her misgivings. The article is not as heavy-handed as you might expect.

Sample sentence: "The influx of Muslims here has profoundly unsettled some residents of the town long known for its love of dancing, beer, paczki pastries and the pope."

More concretely, the Muslim call to prayer  "echos through the city’s streets five times each day".

How about this part?

Most of the women strolling Joseph Campau Avenue wear hijabs, or headscarves, and niqabs, veils that leave only the area around the eyes open. Many of the markets advertise their wares in Arabic or Bengali, and some display signs telling customers that owners will return shortly — gone to pray, much in the same way Polish businesses once signaled that employees had gone to Mass.

The article's  emphasis on the Polish heritage might be  a way of implying that, if Polish immigrants could be assimilated, so could Muslim immigrants.

It was 2004 when the city council gave an Islamic center permission to broadcast the call to prayer.  Masud Khan, a mosque leader in Hamtramck, says of that time that  “The Polish people think we were invading them.  We were a big threat to their religion and culture. Now their days are gone.”

"Now their days are gone"?   Is that not a triumphal way to put it?

Note too that there are divisions too among the Muslims, as the city is approximately 23% Arab, 19% Bangladeshi and 7% Bosnian.

You can check out the article for yourself  In the first majority-Muslim U.S. city, residents tense about its future,  by Sarah Pulliam Bailey, Washington Post, Nov. 21, 2015.  Photographs are included.