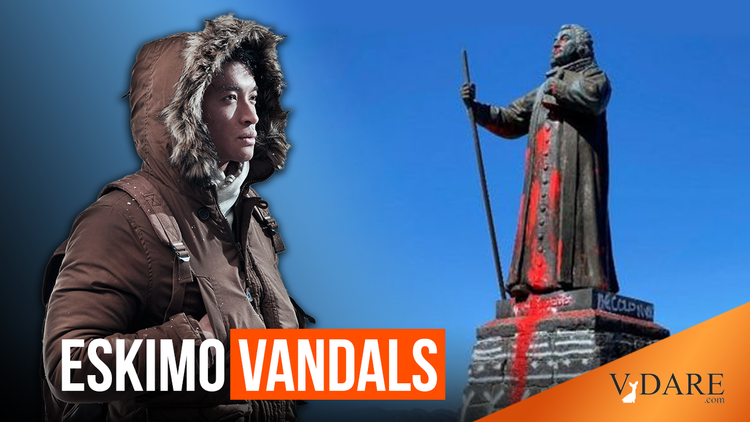 Now ESKIMOS Have Vandalized A Statue In Greenland

Greenland. We don't get much news out of Greenland. Scanning my Radio Derb archives, I see only two real references. One, from the science news in August 2016, was about the Greenland Shark having been determined to be the longest-lived of all vertebrates—up to 400 years.

The other, from March that same year, just mentioned a review I had done of a book about Greenland, a book that made the place sound like a crappy welfare slum.

Well, here is some actual news about Greenland. Greenland has a capital city, formerly named Gothåb, nowadays named Nuuk. The first of those names, Gothåb, is Danish — it means "Good Hope" — because Greenland is a Danish colony. It's actually billed as an "autonomous territory" within the Kingdom of Denmark; but I'm guessing the autonomy is highly fictitious.

The population of Greenland is twelve percent Danish, the rest Eskimo or mixed-blood Eskimo-Danish. Hence that second name, Nuuk, which is the Eskimo word for "Cape," as a concession to Eskimo sensibilities by the colonial authorities.

OK, so what's the news? Well, there's a big statue of Hans Egede in Nuuk. He was the 18th-century Lutheran missionary who Christianized the locals. Guess what: The statue has been vandalized—splashed with red paint and graffitied with the word "decolonize." Now the Greenlanders are having a vote on whether or not to keep the statue.

Isn't it amazing how these hysterias spread? One day they're vandalizing statues of Andy Jackson in Washington and Winston Churchill in London. Next thing you know, the folk up there in Greenland, on the Arctic Circle, have caught the fever.

I haven't yet heard any chants of "Eskimo Lives Matter!" but it can only be a matter of time.