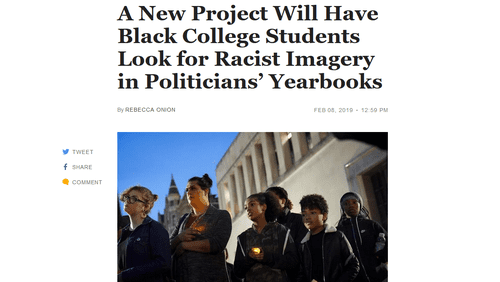 Not a Satire: Black College Students to be Paid to Pore Over Old Yearbooks Seeking Racism

Now that the study of decades' old yearbooks has become the proper manner of ferreting out wickedness in high places, it's only natural that professional yearbook searchers be hired to pore over old annuals.

Slate tells us how this is to be done:

Here’s a unique idea spawned by the blackface scandals in Virginia this week: A group of activists from Richmond has put together a GoFundMe to pay students from historically black colleges and universities to go through yearbooks and look for evidence of “racist behavior and imagery” on the pages of present-day Virginia state officials and candidates for public office. Community organizer Chelsea Higgs Wise and another activist, Bob Bland, had the idea for this project on Monday; as of Friday morning, the GoFundMe had raised about $6,000 of its $10,000 goal.

A New Project Will Have Black College Students Look for Racist Imagery in Politicians' Yearbooks, by Rebecca Onion, Slate, Feb. 8, 2019

"Onion" is the article writer's surname, it's not saying this was published on The Onion, although it might seem like it.

Last Friday [February 1], the pro-Trump website Big League Politics published a scan of a blackface photo on Democratic Gov. Ralph Northam’s medical school yearbook page. The photo had been submitted, one of the site’s owners said, by “classmates of Northam” who were outraged by the governor’s recent statement on late-term abortion. This GoFundMe, sponsored by a group on the other end of the political spectrum, looks to systematize this kind of grassroots research into politicians’ backgrounds. The researchers plan to start with state-level elected officials in Virginia—those that are facing re-election in 2019 or 2020, as well as those that community members flag as possibly having (as Wise put it in a phone call) “the kind of implicit bias that could be shown through their yearbooks.”

We already knew there are dumb and embarrassing things in old yearbooks, as well as bad haircuts.  But now we know there was "implicit bias" there all along.

Wise stressed that the group sees racist displays in yearbooks as being intimately connected to politicians’ present-day policy choices. Indeed, a project like this one takes as a given the proposition that yearbooks matter. As my colleague Lili Loofborouw argued in Slate on Thursday: “What a yearbook page can tell us is how someone sought to strategically situate themselves in their network. … Yearbooks are as aspirational as they are commemorative.”

Read that last part again, if you can stomach it : "What a yearbook page can tell us is how someone sought to strategically situate themselves in their network. … Yearbooks are as aspirational as they are commemorative.”

It's the Yearbook Theory of Social Networking.

While the basic idea for the project is extremely simple, details relating to scope and methods will be worked out as the group moves forward. Wise said, “Since we posted [the GoFundMe], we’ve been getting a lot of people reaching out to help with digital research,” which could be performed on any number of sites that host scanned yearbooks. Given that every yearbook from every school isn’t online (yet), some research will have to be done in the physical collections of universities. For that, the group has connections with Virginia State University and Virginia Union University, and hopes to tap its networks to access other archives when needed. “The bigger this grows,” Wise said, “the more we’ll be asking for resources. … Right now, we’re asking for financial support, but we’re also asking for those who have that access to help us.”

This is rather ambitious, as well as expensive and time-consuming. And creepy and totalitarian.

Eventually the government may have to just take over the publication of all yearbooks to make sure they are totally PC upon publication. But of course, what's PC in the current year may not be in a future current year.

The project proposes to pay the student researchers $25 an hour—a very fair wage—and to offer them guidance from trained archival professionals as they do their work, so that they can learn on the job. (At that rate, a $10,000 budget would pay for 400 hours of research.) This topic “relates to something going on that [students are] interested in,” Wise said. “They can connect how they’re in college right now, looking at other colleges from decades ago, and maybe even point out what’s going on right now in their schools that could be seen as a racist narrative in 20 or 30 years.”

Somebody please tell me this is satire.....