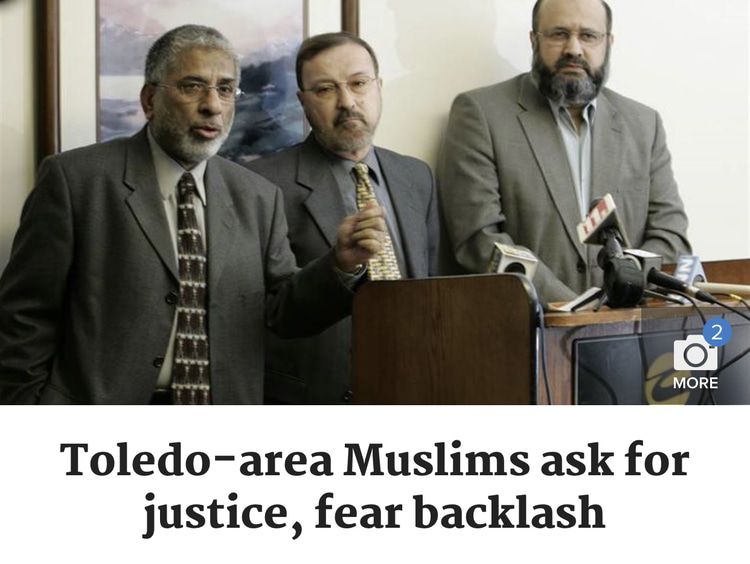 Three Toledo men were indicted on terror charges Tuesday, another instance of foreign sleeper agents who have burrowed into the heartland [3 indicted in terror plots]. Those immigrants' American Dream was to kill Americans.

(Last May it was reported that the Justice Department had "charged 375 persons in terrorism-related cases, 195 of whom already have pleaded guilty or been convicted, and removed from the country more than 500 people linked to September 11. " ["Terrorists will fail, official says"])

At the Toledo Blade, editors published the standard sub-genre of sob story in response: you can't have a terror arrest article without a fear-of-backlash story among local Muslims ["Toledo-area Muslims ask for justice, fear backlash."].

Dr. Mahjabeen Islam, co-founder and board member of the United Muslims Association of Toledo, said she fears that persecution of American Muslims is on the rise. She said she would not be surprised if some U.S. Muslims end up in internment camps like Japanese-Americans during World War II.
"It's worse than 9/11," said the Toledo physician. "I think this is just the beginning."

Nothing has happened to these whiners, yet they are crying up a storm. There has been very little backlash against Muslims living in America, yet they continually squawk like they are the victims.

On the contrary, the 3,000 dead Americans of 9/11 are the victims, while Osama and his henchmen threaten to nuke U.S. cities and kill millions. It would be nice if the press and the "Muslim community" remembered these little details.