None Dare Call It IQ 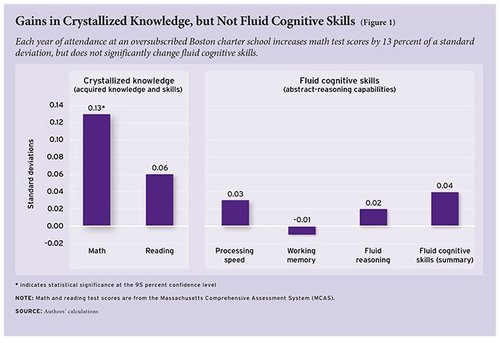 What Effective Schools Do: Stretching the cognitive limits on achievement

Arguably, the most important development in K–12 education over the past decade has been the emergence of a growing number of urban schools that have been convincingly shown to have dramatic positive effects on the achievement of disadvantaged students. Those with the strongest evidence of success are oversubscribed charter schools. These schools hold admissions lotteries, which enable researchers to compare the subsequent test-score performance of students who enroll to that of similar students not given the same opportunity. Through careful study of the most effective of these charter schools, researchers have identified common practices—a longer school day and year, regular coaching to improve teacher performance, routine use of data to inform instruction, a culture of high expectations—that have yielded promising results when replicated in district schools.

We have only a limited understanding of how these practices translate into higher academic achievement, however. It may be that attending a school that employs them enhances those basic cognitive skills—such as processing speed, working memory, and reasoning—that research in psychological science has shown contribute to success in the classroom and later in life. Do schools that succeed in raising test scores do so by improving their students’ underlying cognitive capacities? Or do effective schools help their students achieve at higher levels than would be predicted based on measures of cognitive ability alone?

To address this question, we draw on unique data from a sample of more than 1,300 8th graders attending 32 public schools in Boston, including traditional public schools, exam schools that admit only the city’s most academically talented students, and charter schools. In addition to the state test scores typically used by education researchers, we also gathered several measures of the cognitive abilities psychologists refer to as fluid cognitive skills. Our data confirm that the latter are powerful predictors of students’ academic performance as measured by standardized tests.

Yet while the schools in our sample vary widely in their success in raising test scores, with oversubscribed charter schools in particular demonstrating clear positive results, we find that attending a school that produces strong test-score gains does not improve students’ fluid cognitive skills. Put differently, our evidence indicates that effective schools help their students achieve at higher levels than expected based on their fluid cognitive skills. It also suggests that developing school-based strategies to raise those skills could be an important next step in helping schools to provide even greater benefits for their students.

Despite decades of relying on standardized test scores to assess and guide education policy and practice, surprisingly little work has been done to connect these measures of learning with the measures developed over a century of research by cognitive psychologists studying individual differences in cognition. Psychologists now consider cognitive ability (few dare say “intelligence” anymore) to have two primary components: crystallized knowledge and fluid cognitive skills.

Obviously, the authors are IQ scholars. What better illustrates Jonathan Haidt’s argument about the intensity of ideological bias in the field of psychology that IQ experts don’t “dare” mention the name of their subject anymore?

Crystallized knowledge comprises acquired knowledge such as vocabulary and arithmetic, while fluid skills are the abstract-reasoning capabilities needed to solve novel problems (such as the ability to identify patterns and make extrapolations) independent of how much factual knowledge has been acquired. The terms were coined by the late psychologist Raymond Cattell, who first distinguished two types of intelligence. Cattell noted that one “has the ‘fluid’ quality of being directable at almost any problem,” while the other “is invested in particular areas of crystallized skills which can be upset individually without affecting others.”

Hundreds of studies show that, at any point in time, the two are highly correlated: people with strong fluid cognitive skills are at an advantage when it comes to accumulating the kinds of crystallized knowledge assessed by most standardized tests.

That these capabilities are nonetheless distinct is best illustrated by the fact that fluid cognitive skills decline with age starting even in one’s twenties, while crystallized knowledge tends to rise over the decades, in some cases peaking as late as one’s seventies. In an influential 2002 study involving people ages 20 to 92, University of Texas at Dallas psychologist Denise Park and colleagues found that the fluid cognitive skills of participants in their twenties exceeded those of participants in their seventies by as much as 1.5 standard deviations.

For example, my working memory for random information is shot. Back in the 1980s, I could look at a 7-digit phone number and remember it long enough to write it down. Now 10 digit phone numbers require three glances.

Of course, we don’t know how much of the achievement test scores seen above are due to short-term test prep or cheating. But let’s assume for the moment that they are valid.

The graph above is consistent with my long-held view that while it’s difficult (but not necessarily impossible) to boost adult IQ through schooling, schools could generally be doing better with the IQs that students bring to the table. Thus, I’ve argued that rather than try to Close the Gap of about 1 standard deviation between Non-Asian Minorities and Asians and whites, our national goal should instead be to boost each group’s average performance by one-half standard deviation over current levels. That would have about the same total national improvement in test scores, and is far more feasible due to diminishing returns as you try to move from +0.5 sd to +1.0 sd.

KIPP charters are basically militaristic boot camps for hard-working kids with IQs probably averaging in the 90s. The idea is to get them away from the layabouts and troublemakers in regular schools and then drill them intensively in the basics. This isn’t going to turn them into the next John Updikes, but it likely will mean they will be employable in positions like, say, assistant managers of Walmarts and other jobs better than, say, hauling pallets around Walmarts, which is all they’ll be qualified for if they don’t learn to read and figure.

(I recently visited a prosperous small town with few illegal immigrants. While shopping at the local Walmart, I learned not to ask pallet-haulers where items in the cavernous store were. They’d have to bring their heavily laden carts to a stop, then think for 15 seconds, then tell me they don’t know but I could ask somebody else, then get their loads moving again. In other words, in this town far from the Mexican border, Walmart employs borderline retarded Americans, which is a good thing.)

You’ll notice from the graph that the gains in test scores are more than twice as large in math as in reading. Math is something that few kids do outside of school or tutor sessions, while those who get good at reading do a lot of reading on their own.

There is quite a bit of evidence that America is doing a somewhat better job of teaching math than in the Fast Times at Ridgemont High era. But as Education Realist has argued, verbal skills such as reading comprehension are probably more important overall for our economy and society than math skills. And we’re not making as much progress with that.

Finally, the gains in IQ subcomponents, while small, shouldn’t be wholly dismissed. Maybe there is nothing that can be done about working memory, but the other gains could add up over time. Of course, that’s a huge question: do they keep going up a little year after year, or do they soon plateau?