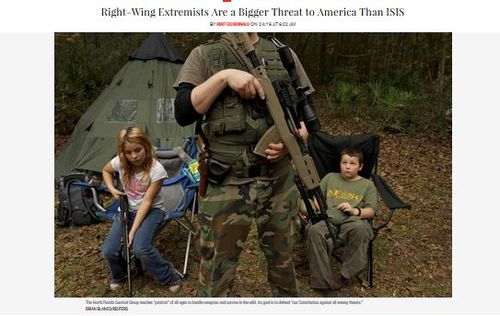 No, NEWSWEEK, Scary White Men Aren't More Dangerous Than ISIS, They're What Defends The Country

Newsweek's Kurt Eichenwald is going with the headline Right-Wing Extremists Are a Bigger Threat to America Than ISIS. The picture at the head of the page is a member of the North Florida Survival Group, a white guy with a rifle, pistol, and vest, who's going camping, and also shooting. As far as I know, members of this group aren't plotting against the government, they're just shooting enthusiasts, like author Larry Correia, or YouTube star Nutnfancy, both highly respectable citizens. After detailing a plot by two white guys to kill Muslims, Eichenwald writes:

They and untold thousands like them are the extremists who hide among us, the right-wing militants who, since 2002, have killed more people in the United States than jihadis have. In that time, according to New America, a Washington think tank, Islamists launched nine attacks that murdered 45, while the right-wing extremists struck 18 times, leaving 48 dead. These Americans thrive on hate and conspiracy theories, many fed to them by politicians and commentators who blithely blather about government concentration camps and impending martial law and plans to seize guns and other dystopian gibberish, apparently unaware there are people listening who don’t know it’s all lies.

The main thing you need to know about the report he's quoting (aside the fact that "since 2002" ignores 3000 murders on 9/11) is that it only counts Muslim killings in the US that have provable connections to overseas terror—and Muslims in the US kill people all the time without the government admitting that. It took a long time for the government to admit that the 2002 Los Angeles shootings were terrorist, and the Obama administration has refeffred to the Fort Hood shootings as "workplace violence".  Both of those are on the New America list, but here are some that aren't, as I wrote after the Charlie Hebdo attacks prompted to Sally Kohn to promote this crazy idea.

The New America list omits some terror attacks (including three murders by the Tsarnaevs):

But immigrant Muslims are always killing people in America  for random reasons–take Somali immigrant Omar Mohamed Kalmio who, as Brenda Walker wrote  “got life in prison for a 2011 mass murder in two parts. First he shot his girlfriend, then drove across town to murder her 13-year-old brother, her mother and the mother’s boyfriend. ”

Black Muslims are heavily included in the crime statistics–two Black Muslims and one immigrant Muslim are included in my survey of “Disgruntled Minority Massacres”, (anti-white workplace shooters) although the point of that article was that they were motivated by anti-white hatred more than Islam.

Muslims have been in mass shootings–see the case of John Zawahri:If A Maniac With A Middle Eastern Name Shoots A Bunch Of Americans, Inquiring Minds Want To Know If He's A Muslim, Don't They? Well, Don't They?

Then there was Orange County carjacker Ali Syed, who killed three people and himself. That was a Muslim mass murder, wasn’t it?

I wrote at the time of the Ali Syed murders that “Even if it's not Sudden Jihad, but ordinary homicidal gangsterism, I still think Ali Syed should have been doing it in some other country.”

But the point is this–the Media isn’t allowed to notice that a killing is done by a Muslim, but is encouraged to look for right-wing ties where none exist.