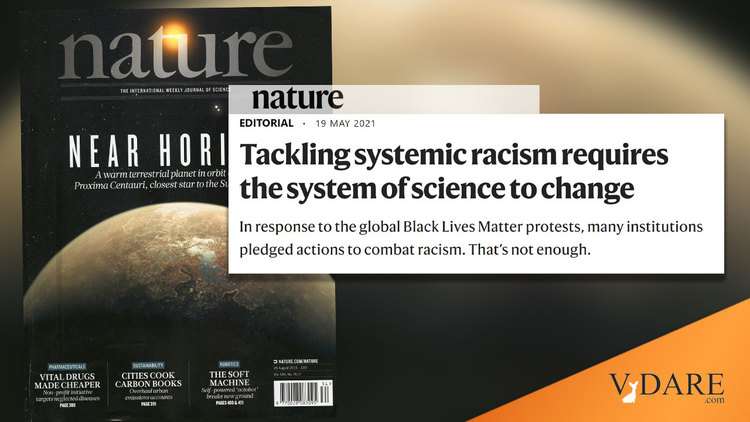 Earlier: The Triumph Of Ibram X. Kendi's Logic: The Kids MUST Be Equal, So The Tests Are At Fault

Tackling systemic racism requires the system of science to change

In response to the global Black Lives Matter protests, many institutions pledged actions to combat racism. That’s not enough.

Next week marks a year since the murder of George Floyd, and nearly a year since the Black Lives Matter protests compelled numerous institutions — including many in research — to acknowledge systemic racism. …

As part of that response, Nature recognized systemic racism in science and our part in it, and committed to stand against it.

We know that such statements must be followed by actions. At Nature, we have made it an editorial priority to expose and tackle racism in science by publishing more research, commentary and journalism about racism and racial injustice. Next year, we will produce a special issue, under the guidance of a group of external editors, that examines systemic racism in research.

We will be launching a news internship for Black journalists later this year. We are taking further steps to diversify our authors, reviewers and contributors. And we know that too few of our editorial staff are people of colour, so we are working to change this.

The other journals and teams in the Nature Portfolio are also forging stronger connections with communities of Black researchers; and our publisher, Springer Nature, has made commitments to champion diversity internally and in the communities it serves. Its Black Employee Network, formed in August 2020, has made valuable contributions to editorial policy and to elevating Black voices in science, technology, engineering and mathematics (STEM). Many other journals and science publishers have also made welcome changes.

But we know we are only at the foothills; there is a mountain ahead. We need to do much more, and are determined to do so. At the same time, we recognize that such pledges and actions, by themselves, do not constitute systemic change.

Racism in science is endemic because the systems that produce and teach scientific knowledge have, for centuries, misrepresented, marginalized and mistreated people of colour and under-represented communities. The research system has justified racism — and, too often, scientists in positions of power have benefited from it. That system includes the organization of research: how it is funded, published and evaluated.

Ending systemic racism will therefore require those in the system, including Nature, to collectively acknowledge and study these facts, and to ask: how and why did this happen? We need to thoroughly understand the root causes, even as we seek energetically to remedy the ongoing damage. Some have already started down this road….

Hundreds of individual organizations have pledged actions to combat racism. All of these are important, but on their own they will not bring about the systemic change that is required. One essential change all institutions can make today is to put the right incentives in place. They must ensure that anti-racism is embedded in their organization’s objectives and that such work wins recognition and promotion. Too often, conventional metrics — citations, publication, profits — reward those in positions of power, rather than helping to shift the balance of power.

… Together, we will move further, faster.

After all, as Ibram X. Kendi has taught us, the only conceivable scientific explanation for the lack of black accomplishment in science (e.g., zero hard science Nobels ever) must be white people’s systemic racism. Nice liberals used to assume that blacks would catch up soon, as the past recedes ever further into the past, but after a half-century of not just civil rights but also pro-black affirmative action, nobody anymore believes blacks will ever reach statistical equality with whites and Asians in science on their own merits. So, in 2021, the only remaining possible explanations are

And even if whites somehow stopped exuding this racist miasma, all the miasma they exuded in the past would still be hovering around and, in fact, would only grow in potency in the future due to the newly discovered Law of Antiquarianism that states that events in the distant past have vastly more influence on the present than do recent events.

The revealed truths of Kendiism require that blacks not just be given even more affirmative action, but that society be rearranged so that racial commissars are employed everywhere to make sure that nothing hurts the racial self-esteem of the black race ever again.

You might think that employing a lot of relatively low brow racial commissars to oversee real scientists will retard the advance of science, such as genetics was destroyed in the Soviet Union for a generation by the imposition of anti-hereditarian Lysenkoism.

But do you really want to think that, ally?