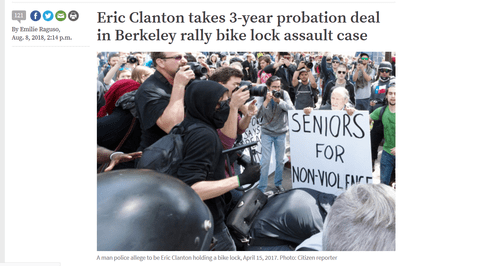 A former East Bay college philosophy professor who was charged with four counts of felony assault with a deadly weapon, causing great bodily injury, has taken a deal resulting in three years of probation for an attack at a Berkeley protest last year, court records reveal.

Eric Clanton had been linked by police to violent assaults with a metal bike lock during a “free speech” rally in Berkeley on April 15, 2017. Before his arrest, Clanton had been “outed” online, on the website 4chan, as someone who used a bike lock to strike a man in the head. The assault was captured in a video clip (below) that drew widespread attention and anger after it was posted on YouTube.

Wednesday, Clanton was supposed to have had his preliminary hearing, where a judge decides whether there’s enough evidence in a case for it to move ahead to trial. Instead, there was no hearing, and information about Clanton’s plea deal became available online.

According to Alameda County Superior Court records, Clanton entered a “no contest” plea Wednesday to one misdemeanor battery charge. The felony charges against him were dismissed, and an allegation that he had caused serious bodily injury was stricken. A misdemeanor charge that Clanton wore a mask during the commission of the crime also was dropped.

Police said, previously, that Clanton attacked at least three people with a metal U-lock during the April 15 rally in and around Civic Center Park. Court papers later revealed that Clanton struck at least seven people in the head, according to authorities. One person received a head laceration that required five staples to fix. Another was uninjured but had a piece of a helmet broken off. A third was struck across the neck and back, police wrote.

But hitting a white man over the head with a bike lock is just a pungent joke. The bike lock is mostly made of irony.

I guess I’m just some kind of nutjob extremist, but shouldn’t we have rule of law rather than “Who? Whom?” Justice where a designated Who with the right (left) politics gets to hit unpopular Whoms with the wrong (right) politics over the head with his bike lock?

Some people on Twitter have suggested that maybe Prof. Clanton got off so lightly because he might have snitched on some of his fellow Antifa masked marauders. I don’t see any evidence for that yet, but I like the idea of that rumor spreading among Antifa types.

Is there a federal civil rights case here? It’s not uncommon for the feds to toss out the Constitution’s double jeopardy prohibition and retry unpopular defendants who got acquitted, such as the cops in the Rodney King case.