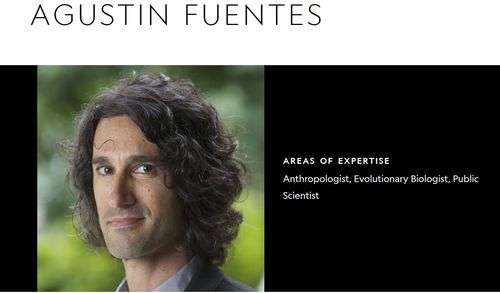 National Geographic under the editorship of Susan Goldberg is transforming from an apolitical quasi-scientific journal into an increasingly naked vehicle for left-wing politics.

Issues in the past few years have seen aggressive promotion of transgenderism, illegal immigration, and faint-to-the-floor apologies for the frank coverage of ethnicity from decades ago.

This month's edition features a gem from Agustin Fuentes a professor at Notre Dame, who writes about nasty online behavior as observed from his position as an evolutionary anthropologist.

"Are We as Awful as We Act Online"?  focuses almost exclusively on anonymous Internet and social media anger from the right, ignoring pungent examples from the left.  Fuentes [Email him] praises Black Lives Matter as an example of positivity on the Internet.

Fuentes crows that things are getting better, because "the neo-Nazi rallies have diminished" (never mind that Charlottesville happened in real life, not online), "and some of the alt-right hate websites have been taken offline—all because thousands of people stood up to them and said 'no more.'"

But is the shut-upping of the baying mob any less belligerent or intolerant?  Is this an academic talking, or a white-hater peddling his hate using his PhD as cover?

Fuentes tells us that online aggression is caused in part by "economic processes that generate massive inequality", tipping us off that Karl Marx is his own favorite anthropologist.

Look, professor.  I'll try to make this civil.  Anonymous online aggression—at least of the racial-political variety — is only revealing what exists naturally, and previously didn't get expressed because there wasn't an Internet.

Yes, some of it is expressed in earthy terms that wouldn't play well face-to-face.

But the emotions are real. They come from a pretty basic anthropological place—the desire of human beings to live in a society with their racial and ethnic kind, and well-placed anger about obvious racial competition for land and resources that whites, for one, aren't even allowed to notice without sustaining a massive attack from every conceivable power center.

Even prey destined to die is permitted some harrowing squeals and futile scratching before becoming the predator's lunch.

Should awful acting online come as a surprise?