No, Harriet Tubman Wasn't A "Gun-Toting Republican"—And The Leftists Promoting The New Money Know It

I wish conservatives would shut down the ridiculous Facebook/Twitter memes that claim leftists are pretty stupid for wanting to put a "gun-toting Republican" on the $20 bill. It's quite embarrassing.

Here is the latest: 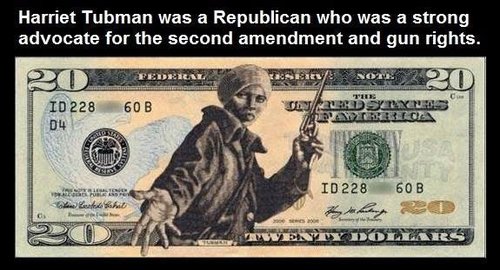 Being illiterate, Tubman likely didn't know what the Second Amendment was, and to the degree she was a Republican, it wasn't because she subscribed to what the GOP peddles now. Or then, for that matter.

What's stupid is conservative Republicans imputing their modern political beliefs to a 19th-century slave. Do they not realize that mischief is afoot if the left supports this so much?

"By placing Tubman ... into the central pantheon of American history, the Tubman $20 bill provides a green light by which the revolutionary process of transformation and reconstruction can charge full speed ahead. Moreover, by placing Tubman at the center of the American national pantheon, the $20 bill also serves to undermine any argument against the revolutionary political agenda that it has come to symbolize. Having promoted or accepted the symbol of the new dogma as a defining— perhaps the defining — icon of the American political order, those who oppose the revolutionary agenda the symbol represents have little ground to resist that agenda."

That's the problem with the new face on the $20, and it's a problem that the cuckservatives who have learned to "love Big Sister" can't even see.