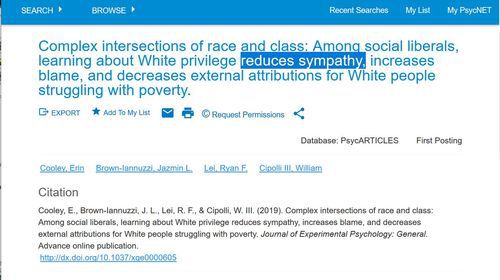 White privilege lessons are sometimes used to increase awareness of racism. However, little research has investigated the consequences of these lessons. Across 2 studies (N = 1,189), we hypothesized that White privilege lessons may both highlight structural privilege based on race, and simultaneously decrease sympathy for other challenges some White people endure (e.g., poverty)—especially among social liberals who may be particularly receptive to structural explanations of inequality. Indeed, both studies revealed that while social liberals were overall more sympathetic to poor people than social conservatives, reading about White privilege decreased their sympathy for a poor White (vs. Black) person. Moreover, these shifts in sympathy were associated with greater punishment/blame and fewer external attributions for a poor White person’s plight. We conclude that, among social liberals, White privilege lessons may increase beliefs that poor White people have failed to take advantage of their racial privilege—leading to negative social evaluations.