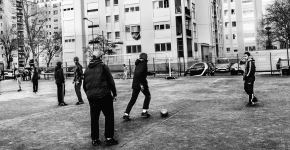 The Other France Are the suburbs of Paris incubators of terrorism?

Although the alienated, impoverished immigrant communities outside Paris are increasingly prone to anti-Semitism, the profiles of French jihadists don’t track closely with class. Many of them have come from bourgeois families.

This is one of those immensely long New Yorkery articles that aren’t really worth reading unless your dentist is running way behind, but the overall impression conveyed of France’s Middle Eastern and black African neighborhoods is dismal and alarming.

Some attention is given to blaming the poor performance of blacks and Arabs in France on France’s revolutionary traditions of secular, individualist Republicanism, not to mention the Algerian uprising of 1954-1962, although no effort is made to determine if France does better or worse with these populations than other European countries with other traditions and other histories.

But of course the most striking omission is any reference to the current Camp of the Saints. The mainstream media’s conventional wisdom is that countries like France should take in more, much, much more of the hair of the dog that bit them.

Reading Packer’s article, it would be virtually impossible to think that a wise course of action. On the other hand, dissenters are punished.

So the issue of the hour is simply ignored in this piece.