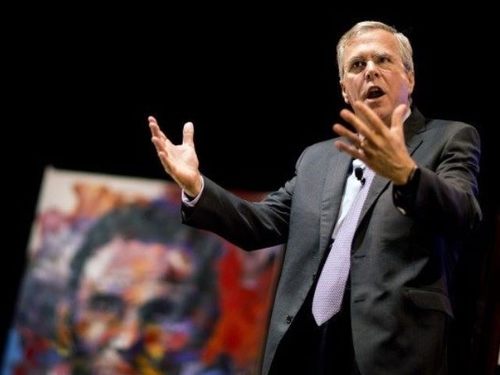 ¡Jeb! Shows How Not to Hit Back at Trump

With the $100 million rich guys have given Jeb, you might think he could afford to hire somebody to write Donald Trump Jokes for him. Trump Jokes have been a popular genre of comedy for about 30 years now, but Jeb seems unaware of the concept of retaliating against Donald Trump by making him an object of laughter. To Jeb, Trump is simply that mean man who says he doesn’t have energy.

Jeb Bush slams Donald Trump in Spanish over his ‘barbarities’

That’s Spanish for “on the attack” — and the former Florida governor certainly is, as he confronted and mocked businessman Donald Trump in English and Spanish on Tuesday.

Trump now enjoys a commanding lead over rivals for the Republican presidential nomination, while recent polls suggest that Bush is on a precipitous decline in Iowa — where he sits in the single digits — and in New Hampshire. A Granite State poll released on Tuesday showed Bush slipping into the single digits there for the first time.

… After a town hall meeting at a Presbyterian school here, Bush explained his decision to go on the offensive, using explanations he’s voiced before in English. But in Spanish, in response to questions from Spanish-speaking reporters, his tone and choice of words was sharper.

“He attacks me every day. He attacks me every day with barbarities,” Bush said in Spanish in response to a question. “They’re not true. What we did today was to put out in his words to show that he’s not conservative. He supports people like Nancy Pelosi. He’s given money to Hillary Clinton. He was a Democrat longer than Republican. He’s said that he’s more comfortable being a Democrat. He doesn’t have a record, because he hasn’t been a person who has served like me, who served for eight years as governor. He’s not a conservative. That’s my point.”

“He’s not conservative. He doesn’t have a career that you could say is conservative,” Bush said later in Spanish. “And beyond that, he personalizes everything. If you’re not totally in agreement with him, you’re an idiot, or stupid, or you don’t have energy or ‘blah blah blah.’ That’s what he does. That doesn’t work – there are millions of people who today are thinking that their future isn’t the way it should be.”

Trump has repeatedly mocked Bush at campaign rallies and on Twitter as a “low-energy” candidate.

When an English-speaking reporter asked Bush why the Trump-Bush feud has become more personal, he said: “It’s all personal for him, sure. Mischaracterizations of my long-standing views. I’ve written a book about it, if he was interested in actually knowing my views, he could read the book and he would know that I’m for border security in a practical way that won’t cost billions of dollars.”

In other words, border security isn’t worth spending billions of dollars for.

Two students asked about immigration reform. In Spanish, one senior asked him whether the children of undocumented immigrants should be able to receive financial aid and what might happen to them as the debate roils on.

“El clima politico es dificil en esto sentido,” he said in Spanish — the political climate is difficult on this issue. But he assured the students, “Yo tengo mi manera de ver las cosas” — I have my way of seeing things, and he said he will stick to them.