Saturday’s New York Times featured a heart-tuggy photo on its front page, something it has done before in the service of diversity.

The subject of the picture is a cutesy immigrant child gazing upon little paper hearts strung on a burned out mosque in Sweden. To my suspicious eye, the perfect composition and oddly folded hands of the girl suggest a posed photo rather than an image taken from life: 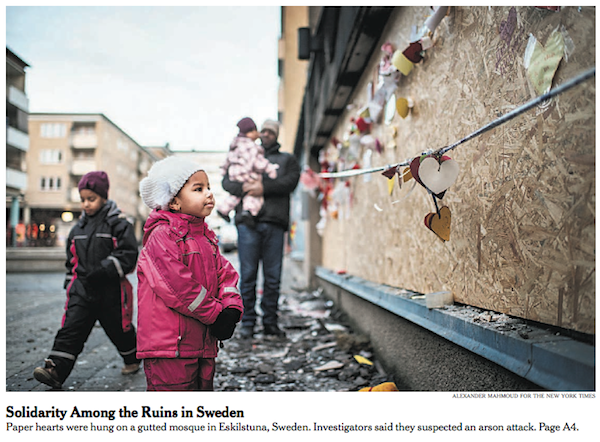 The paper could have featured the destruction by arson of hundreds of cars in the warped New Years tradition of France’s hostile young Muslims. Instead of a giving prominence to the story, the Times ran a one-paragraph AP squib on page A10 (France: Hundreds of Cars Set on Fire).

A little background is needed to understand how Sweden got to a place where mosques are being fire-bombed. In September 2013, the government of Sweden generously (or stupidly) offered to take in any Syrian refugees who could get there — potentially over a million persons. The reality of such a major demographic influx began to become recognized as costing a lot and difficult to organize. Housing and jobs for many thousands cannot be made to appear just by the fervent wishing of liberals.

A few days ago, a group of asylum-seeking Syrians refused to get off the bus for their housing in a small town out in the boonies. Many protested with a hunger strike because their new homes were not urbane enough. One man complained the icey streets made it “dangerous for me to be here.”

So the mosque fires have occurred in an atmosphere of growing tension.

However, not everyone accepts the official story of white Swedes attacking diverse immigrants. An article in The Local (Sweden rallies after trio of mosque fire attacks) has comments and the first one suspects Muslims may have bombed themselves for the sympathy, an opinion that got a lot of favorable up-clicks:

May be they see the SD [Sweden Democrats, the anti-mass-immigration party] is rising so they set fire on their own Mosques to frame it?

In fact, fake hate crimes are fairly common among advocates seeking sympathy for themselves or their cause. A black kid running for student government sent himself racist hate mail to get votes. Liberal professor Kerri Dunn claimed her car was vandalized by evil racists, but witnesses saw her doing the damage and she was eventually sentenced to prison.

As for faked hate crimes carried out by Muslims, Robert Spencer recently listed five examples from last year alone: The Top Anti-Muslim Hate Crime Hoaxes of 2014. One was the murder of Iraqi immigrant Shaima Alawadi by her husband, who tried to make the killing appear to be an anti-Muslim hate crime committed by cruel Americans.

Despite the fact that no arrests have been made and therefore no perps identified in the Sweden case, the Times stuck with the convenient story of white Europeans attacking diverse immigrants. That may be the case, but the possibility of faked hate crimes is just as likely.

ESKILSTUNA, Sweden — As Khalif Samantar knelt for afternoon prayers at the Eskilstuna Islamic Dawa Center on Christmas Day, he sensed a growing heat and a low, rushing sound coming from a nearby hallway. He focused his mind on the ritual, only to realize seconds later that someone was shouting, “The mosque is on fire!”

Mr. Samantar sprang through an open window and rushed through the snow in his stocking feet for help. Though about 70 people were inside the mosque at the time, no one was injured.

The fire, which gutted the Dawa center, was the worst of three suspected arson attacks on mosques in Sweden over the last 10 days. In the same period, two freighters bearing hundreds of asylum seekers were abandoned by their crews off the coast of Italy, adding to a surge of more than 200,000 migrants to Europe in 2014.

“We left our country as refugees. We were not looking for food or benefits, we were looking for somewhere to feel safe,” said Abdirahman Farah Warsame, the imam at the mosque where the fire occurred on Christmas Day. He is originally from Somalia. “Now that is gone. We have a feeling that society is turning against us.”

Indeed, the relentless stream of migrants to Europe — propelled by the war in Syria and turmoil across the Middle East and the Horn of Africa — has combined with economic troubles and rising fear of Islamic radicalism to fuel a backlash against immigrants, directed most viciously at Muslims.

The simmering resentments and suspicions have driven debates across Europe about tighter controls on immigration. Worries about immigration have helped buoy right-wing parties in Britain, Denmark, France and Hungary. German officials recorded more than 70 attacks against mosques from 2012 to 2014, including an arson, and the police in Britain have recorded an increase in hate crimes against Muslims. There are few places where the turn against immigrants is more surprising than Sweden, where a solid core of citizens still supports the 65-year-old open door policy toward immigrants facing hardship that has long earned international respect for the country.

On Friday, hundreds of Swedes gathered outside the royal palace in Stockholm and in other cities to show solidarity with the Muslim population a day after an unknown assailant threw a bottle filled with flammable liquid at a mosque in the northern city of Uppsala and sprayed racist slogans on the building. The firebomb caused no injuries and did not damage the building.

But as each day brings more reports of immigrants who have boarded ships and sneaked across European borders, the famous tolerance of the Swedes is being tested as never before.

Despite a lackluster economy, Sweden was third behind only Germany and France in the number of people registering for asylum in 2012, according to the Migration Policy Institute in Washington. Relative to its population, Sweden received the second-highest share of asylum applications in the European Union after Malta, the institute says.

The Syrian conflict has boosted the number of asylum seekers. Of 81,000 people seeking asylum in Sweden in 2014, roughly half were from Syria, the Swedish Migration Board said.

Opposition to the rising numbers is growing. The far-right, anti-immigrant Sweden Democrats had their best showing ever — nearly 13 percent of votes — in elections in September.

The entry of the Sweden Democrats to parliament in 2010 had already opened the door for a previously unthinkable discussion about turning back the country’s policy of taking in foreigners on humanitarian grounds and granting them access to the country’s generous welfare system.

Adrian Groglopo, a professor of social science at the University of Gothenburg, has studied discrimination in Sweden over the past decade. He said that Sweden has long been a racially segregated country where many immigrants live in ghettos and struggle to find jobs, but that the success of the Sweden Democrats has made racism more socially acceptable.

“It is a very difficult time in Sweden,” Dr. Groglopo said. “Now we can talk about things that we weren’t allowed to talk about before. It is a kind of coup d’état.”

Last month, the Sweden Democrats threatened to bring down Prime Minister Stefan Lofven’s minority government. Early elections were averted only through a last-minute deal that observers say granted the anti-immigrant party even more power by pulling it from the sidelines and making it the primary opposition.

The party’s growth has occurred despite the fact that roughly a fifth of Sweden’s 9.6 million people were born abroad or to immigrant parents in Sweden. Most immigrants here have access to education, but government figures show a disproportionate unemployment rate for them, more than twice the national rate of about 8 percent. The disparity helped fuel riots in immigrant neighborhoods outside Stockholm in 2013.

In Germany, another anti-immigrant movement is underway. In recent weeks, a group calling itself the Patriotic Europeans Against the Islamization of the West has attracted as many as 17,500 people to rallies that demand stifling of immigration. The group has called for more rallies on Monday, in Dresden and Cologne.

Omar Mustafa, president of the Islamic Association of Sweden, which represents about 40 communities across the country, said the recent fires at mosques were the culmination of a year of rising anti-Islamic attacks, from women having their hijabs, or head coverings, pulled off in the streets to the vandalism of 14 mosques, as well as racist or anti-Muslim vitriol spread through social media.

“It is a scary development in Swedish society,” Mr. Mustafa said by telephone. “It is a big movement that is moving from the Internet to the real world.”

Vandals broke windows in the mosque in Eskilstuna twice last year and twice in 2013. But Mr. Warsame, the imam, said the mosque — located in a ground-floor storefront in a residential area of largely immigrants — had good relationships with its neighbors and the city officials.

When people nearby complained about the disturbance of comings and goings for late-night prayers during Ramadan, Mr. Warsame and the leaders of two other mosques with similar problems sought out a remote location for their holiday ritual.

No arrests have been made in the Christmas Day blaze that gutted the mosque in Eskilstuna, or the Dec. 29 fire at a mosque in Eskov or the attack in Uppsala. In response, the national police have tightened security at mosques and other religious buildings across the country.

The fire in Eskilstuna prompted an outpouring of support for the congregation, including an event in which dozens of people pasted handmade, heart-shaped notes to the boarded-up windows of the mosque in what they called a “love bomb.” The event was organized by an activist group known as Tillsammans for Eskilstuna, or Together for Eskilstuna. Despite the support, members of the mosque said they remained rattled.

Mr. Samantar, who is originally from Somalia, said he struggles to get through his prayers without smelling smoke or hearing the rush of a fire. After he escaped that day, he said, he feared that women and children were trapped in other rooms of the burning building, and anxiety haunts him still, even in his sleep.

“We would always take our families with us to the mosque,” said Mr. Samantar, a father of three. “The mosque was always our safe place. It’s not anymore.”