The gold rush is on in California for illegal aliens to grab much desired driving permits so they won't be deported or have their cars impounded as they drive to their stolen American jobs.

Boosters of illegal alien driving insist that learning the rules of the road will make the lawbreakers better drivers and less likely to kill innocent Americans even though drunk driving is a cultural value of Mexicans and is the cause of many crashes.

Below, Mexicans await their DLs in the Orange County DMV. 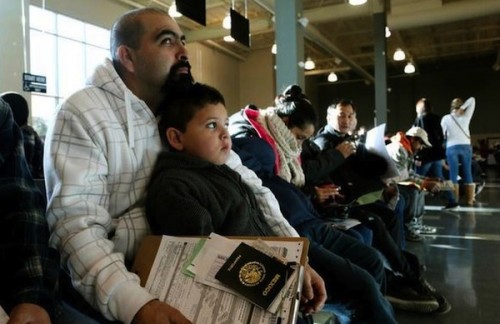 The DMV lines are long not only because an estimated 1.4 million want the driving cards but also because a number of the foreigners have to return for a retry after failing the written test.

Bundled up in a hat and jacket, Rogelio Yerena stood outside the Sacramento-area Department of Motor Vehicles office on Broadway on Friday morning, anxiously smoking a cigarette.

He had already been in line for half an hour, but he estimated there were another 30 or 40 people ahead of him before he would have a turn to take the written exam for a driver’s license.

“I studied a little bit,” he said in Spanish. “But with all the years I’ve been driving, I think I know the rules.”

Yerena was among the first batch of applicants to flood DMV offices on Friday as California became the 10th state to begin issuing driver’s licenses to immigrants who are in the country illegally.

Signed by Gov. Jerry Brown in 2013 after more than 15 years of lobbying by immigrant advocates, AB 60 requires applicants to prove only their identity and California residency, rather than their legal presence in the state. Under the law, which took effect at the beginning of this year, about 1.4 million undocumented immigrants are expected to apply for the special licenses over the next three years.

Yerena said he moved from Mexico with his family nine years ago and now lives in West Sacramento. He was looking forward to getting his license “as soon as possible.”

After once getting hit by another driver on the freeway and having to pay a fine for driving without a license, he said, “I’m always nervous when I go out driving, because there’s the possibility that something could happen and they’ll take away my car.”

DMV employees were not authorized to speak to the press, but several said their office was much busier than usual, though it was hard to tell how much of that was due to AB 60.

The start of a new year may also have contributed to the rush. In a statement, the DMV said it had seen about 6,200 AB 60 applicants statewide by noon. Those who passed the written exam were given a driver’s permit and required to return another day to take the road test.

In south Sacramento, the line at the DMV curled through the lobby, and sometimes out the front of the building, into the afternoon. More than a hundred customers filled rows of chairs, and a steady stream of cars circled the parking lot looking for any open space.

“Nobody’s passing,” she said in Spanish.

Oropeza said the instructions for the test, taken on a computer, were confusing. She skipped several questions, hoping to return to them at the end, but the exam wouldn’t let her go back, and the blank answers counted against her.

Having already spent more than three hours at the DMV, she couldn’t stay to take the exam a third time, she said, because she had to get to work.

Oropeza said her family had come to California from Mexico 20 years ago, and she had been driving without a license for six years.

“I’m always scared the police are going to stop me,” she said. “I’ve been lucky.”

Keli Finao, 49, sat on the brim of a planter with his wife, quietly studying the AB 60 application. He had just heard about the new licenses the night before and was in disbelief.

Finao said he came from Tonga 15 years ago to take care of his ailing parents, but he stayed after they died. Now he has his own landscaping business, though he loses jobs sometimes, he said, because he doesn’t have a California driver’s license.

Satisfied that the new licenses were not a joke, Finao and his wife planned to return another day to submit their applications.