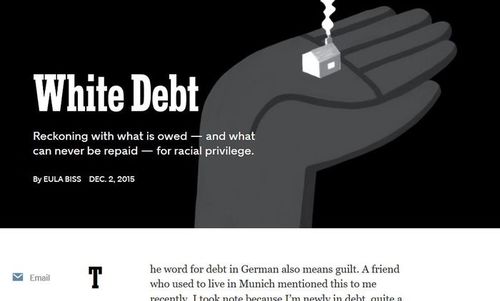 White Debt Reckoning with what is owed — and what can never be repaid — for racial privilege.

… Whiteness is not a kinship or a culture. White people are no more closely related to one another, genetically, than we are to black people. American definitions of race allow for a white woman to give birth to black children, which should serve as a reminder that white people are not a family. What binds us is that we share a system of social advantages that can be traced back to the advent of slavery in the colonies that became the United States. ‘‘There is, in fact, no white community,’’ as Baldwin writes. Whiteness is not who you are. Which is why it is entirely possible to despise whiteness without disliking yourself.

This mantra — “White people are no more closely related to one another, genetically, than we are to black people” — is one of the most common urban legends of the 21st Century even though it’s obviously stupid. (It seems like I used to know where this myth originated, but I’ve forgotten.)

If you have any sense of how genetics are related to genealogy, then it’s clearly not true on average.

But even though everybody these days claims to be interested in genetics, and our pop culture is obsessed with heredity (e.g., Creed is about the biological son of Rocky Balboa’s opponent Apollo Creed, and I imagine the upcoming Star Wars movie will have some kind of “Luke, I am your father” thing going), very few people seem to be able to reason about genetics from what is obvious about genealogy. Or even notice they are connected.