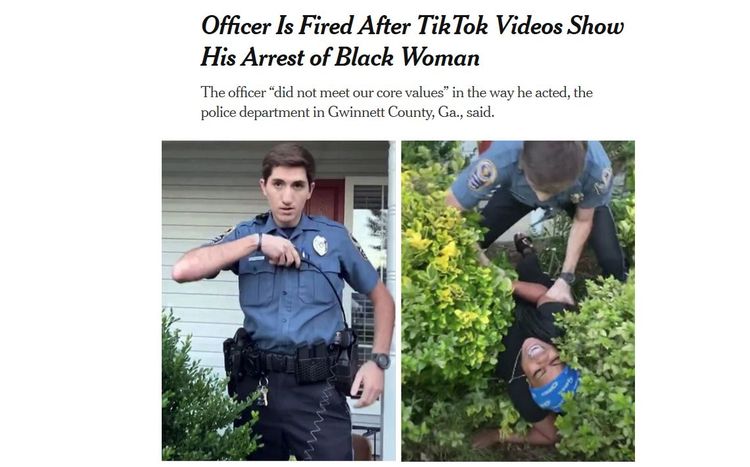 Georgia Cop Fired for Violating America's Newest Constitutional Right: The Right Of Black Criminals Not To Be Arrested If They Don't Feel Like It

From the NYT news section:

The officer “did not meet our core values” in the way he acted, the police department in Gwinnett County, Ga., said.

… When Officer Oxford arrived, he said he was told that a bottle had been thrown at a car, according to a police report.

… When Officer Oxford got to the house, he saw a woman who matched the description of the person in the surveillance footage who picked up the bottle before the police arrived, he wrote. He attempted to speak to her but could not because Ms. Smith and others were yelling at him, the report said.

“I’m not going anywhere,” Ms. Smith tells the officer in one of several videos posted on TikTok.

Mr. Oxford told her she could go to jail for obstructing his investigation. In one of the videos, Ms. Smith responded: “It doesn’t matter. You’re on our property. We did not call you. I’m not going anywhere.” …

The officer told Ms. Smith she was under arrest, pulled at her and used a Taser as she fought being handcuffed. Ms. Smith fell to the ground onto a patch of bushes near the porch where she had been standing, the report said.

In a second video, Ms. Smith could be heard saying, “Call the police, Momma.” Officer Oxford, standing over her, attempts to handcuff one of her wrists.

“Don’t touch me,” Ms. Smith says. She waves her arm away from Officer Oxford, who continues his effort to handcuff her. Onlookers are heard yelling for him to stop.

“You’re on her neck,” a person off camera says. “Do you not understand what you’re doing?” Officer Oxford tells Ms. Smith to stop resisting.

In a third video, Ms. Smith is sitting upright and struggling with Officer Oxford who says “Give me your hands” several times.

Toward the end of a video, another white officer arrives and helps to handcuff Ms. Smith.

Although Officer Oxford was fired, the department did say there was probable cause to arrest Ms. Smith for obstruction of a law enforcement officer and that his use of force was within the department’s policy.

Georgia policeman is fired for violating America’s new most fundamental Constitutional right: “No Black may be arrested unless He or She feels like being arrested.”