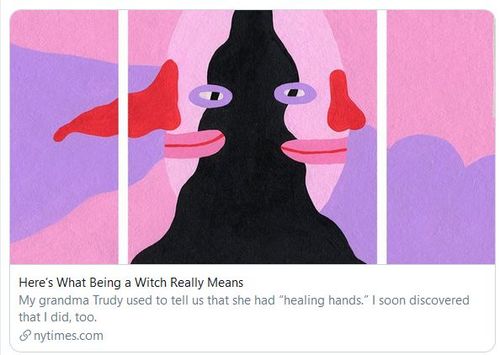 Back in December, I wrote in Taki’s Magazine:

The Unhappiness Explosion
by Steve Sailer

The prestige of the intersectional is pushing respectable opinion in anti-science directions, as seen in the resurgent prestige of astrology and witchcraft. Granted, perhaps it doesn’t matter all that much what lowbrows who like horoscopes and spells are into, but it probably does matter that actual sciences such as genetics, which had been the glamour field of the new century, are starting to be castigated by the prestige press as deplorable “race science.”

Here’s What Being a Witch Really Means

You could say I was primed to be a witch from an early age. …

I’m doing magic when I march in the streets for causes I believe in. (The proliferation of “HEX THE PATRIARCHY” placards fills me with particularly witchly glee).

“Witch” is one of the words I now use to describe myself, but its meaning varies depending on context. At any given time, it can signify that I am a feminist; someone who celebrates freedom for all and who will fight against injustice; a person who values intuition and self-expression; or a kindred spirit with other people who favor the unconventional, the underground and the uncanny.

I use the word “witch” to signify both my Pagan spiritual beliefs — that nature is holy, thus the planet we live on and the bodies we live in are all sacred — and my role as a complex woman who speaks her mind, behavior that is still often met by society with judgment or disdain.

I’m a witch when I’m celebrating the change of the seasons with my coven sisters, as well as when I stand against the destruction of the environment. I’m a witch when I’m giving thanks to the sun, moon and stars, and when I’m working to subvert the corrosive narrative of sexism, racism, queer-phobia and xenophobia. …

Pam Grossman is the host of “The Witch Wave” podcast and the author of “Waking the Witch: Reflections on Women, Magic, and Power,” from which this essay is adapted.