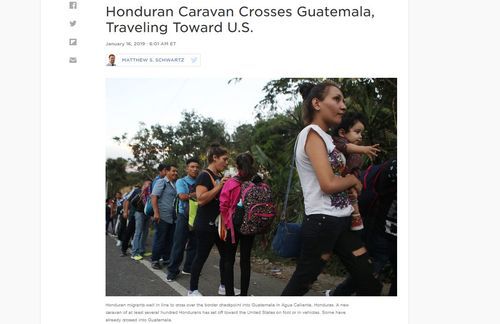 New, More Flexible Caravan On the Move and Moving Towards Our Border

Another caravan has set out from Honduras, and it's heading our way. The vanguard departed on the night of January 14th and is already in Guatemala.

There's something different about this caravan, according to NPR:

This caravan is different from the one that traveled to the U.S. in October, reporter Maria Martin tells NPR. "This particular caravan appears to be composed of disparate migrant groups, each traveling at its own pace."

This actually makes the caravan more flexible and easier to manage.

The vanguard is already in Guatemala.

The first group of several hundred who arrived at the Guatemalan border was held at the border checkpoint of Agua Caliente for several hours as officials checked documentation. Many were then allowed to enter Guatemala, but some unaccompanied minors were returned to Honduras or placed in the care of Guatemalan welfare agencies, Martin reports.

Trump was brought up.

"One caravan member said he wasn't afraid of President Trump and his threat to build a wall," Martin adds. "Many said joining the caravan was their only option, due to a lack of opportunities in Honduras."

So what is Mexico, now under a new presidency, going to do about the caravan? That remains to be seen.

As I reported in my latest article, Mexican Interior Minister Olga Sanchez Cordero gave a speech on the 7th about Mexican immigration policy. She said, among other things, that all entrants to Mexico would have to enter in a legal manner. In the question and answer period she was asked about the caravan (which was in preparation at that time) and she said they were getting ready for it.

On January 16th, President AMLO was asked about it in his morning press conference and said they were keeping an eye on it, but he wasn't too specific.

How difficult would it be to seal Mexico's southern border? In that previously-noted speech, Interior Secretary Sanchez Cordero said that Central Americans can enter Mexico through just 12 legal points. But, she said, Mexico has detected some 370 major illegal border crossings, and thus will not only strengthen the 12, but also determine which of the 370 are suitable for immigration stations.

Over 300 illegal crossing points?  How soon could those be plugged up?

In the same speech, Sanchez Cordero said that foreigners can enter Mexico if they have ID and they do it legally. Then again, if they don't have ID or don't want to do it legally, there are those more than 300 crossing points.

The bottom line is, we have to secure our own border. Part of that is building barriers on it, and part of that is reforming our out-of-control and much abused asylum system.