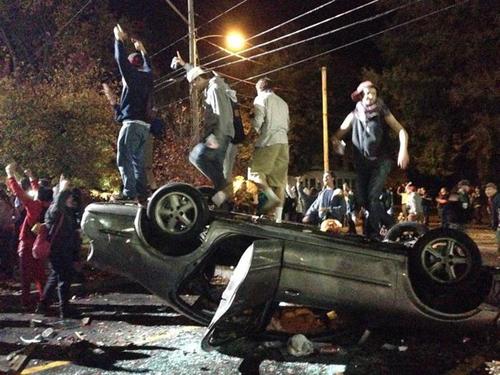 White youths dance on an overturned car in New Hampshire

Mostly white rioters at the New Hampshire Pumpkin Festival, fueled by booze, smashed property and caused injuries in a burst of drunken debauchery.

"State and local public safety officials are on the scene and have been working closely together to defuse the situation," Gov. Maggie Hassan said a statement. "We will continue to monitor the situation and provide any assistance necessary to Keene."

Bonfires burned into the early hours of Sunday morning on city streets that were littered with broken beer and liquor bottles, video from CNN affiliate WMUR showed.

"I am saddened and disheartened at the events surrounding this year's Keene Pumpkin Festival," said Keene State College President Anne Huot. "Despite the concerted efforts of organizers, city officials, police, and Keene State College, there continued to be disruptive behavior at parties in multiple locations around the city, injuries, and property damage."

On Twitter, leftists celebrated that this "proved" the media was racist because this was occasionally called "rowdy" behavior instead of the "riots" in Ferguson.

Of course, there are some essential differences.

Many are saying that the riots were caused by college students — and that sounds about right. After all, if you want to see a "white riot," just check out Michigan State University anytime the basketball team loses a game in March — or for that matter, wins. But to paraphrase Churchill, in the morning Keene State students will be sober, while Ferguson and other black neighborhoods will still be war zones.

But what's the "root cause?"

Steven French, 18, who was visiting from Haverhill, Massachusetts, described the chaotic scene to the local paper, The Keene Sentinel, as "wicked."

"It's just like a rush. You're revolting from the cops," he told the paper Saturday night. "It's a blast to do things that you're not supposed to do."

Other young people shouted expletives at police, started fires in the road, pulled down a street sign and apparently tried to flip over a Subaru, the Sentinel said.

The fact is, we do have a high culture that rewards destructive behavior as liberating. In academia, there's a definite undercurrent of a kind of white jealousy towards black rioters. And in pop culture, there's no better expression of this than "White Riot" by The Clash, all the way back from 1977.

Of course, the lyrics

ring true to me, but "The Man" I'm thinking of is someone like George Soros, Mark Zuckerberg, or Sheldon Adelson. A real revolution would involve confronting the plutocrats who are forcing mass immigration on our society to the detriment of all American workers of all races.

But the vague sense of "rebellion" against all civilized norms fostered by the media and high culture isn't about social justice — it's actually about making sure a rebellious spirit is frittered away in pointless displays of nihilism rather than confronting the real structure of our society.

After all, the academics, media figures, politicians, and celebrities fawning over Ferguson aren't rebels against the System — they are the System.

In the long term, the solution is rebuilding a shattered culture and displacing the System that benefits from it.

In the short term, the solution is the same as in Ferguson. Ruthless coercion. The rioting at a Pumpkin Festival is not the same thing as the continuous sedition we see in Ferguson. But either way, this kind of pointless nonsense shouldn't be tolerated or excused, by blacks or whites.