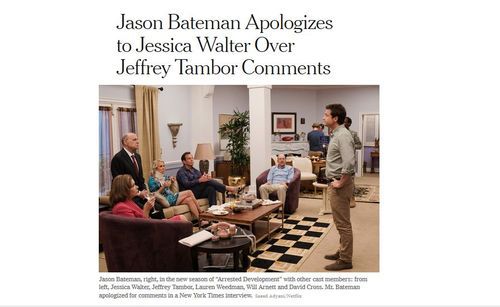 In the iSteve universe, which looks suspiciously like this universe, all moral discourse tends to constantly degrade toward sheer Who? Whom? childish favoritism unless strong recurrent efforts are made to counter this tendency toward ethical entropy with objective standards.

Hence, “sexual harassment” as a career killing offense is now coming to include nonsexual harassment, such as one person yelling at another person during a workplace argument, as long as the yeller is of the Wrong Sex (male) and the yellee of the Right Sex (female).

For example, from the New York Times:

Following a blistering reaction on social media, Jason Bateman, one of the stars of “Arrested Development,” apologized on Thursday after an interview with The New York Times during which he defended Jeffrey Tambor, a co-star, and his on-set behavior toward another co-star, Jessica Walter. Critics accused Mr. Bateman of excusing Mr. Tambor’s verbal harassment at the expense of Ms. Walter, during an era in which male toxicity in Hollywood is facing a reckoning.

Jessica Walter was upset at Jeffrey Tambor (Hey Now Hank Kingsley on “The Larry Sanders Show”) for yelling at her on set. She specified that there was nothing sexual-related about the incident.

Jason Bateman got in big trouble for then saying in defense of Tambor, who has been a comic supporting actor of growing legend since Three’s Company in the 1970s:

What we do for a living is not normal, and therefore the process is not normal sometimes, and to expect it to be normal is to not understand what happens on set. Again, not to excuse it, Alia, but to be surprised by people having a wobbly route to their goal, their process — it’s very rarely predictable. All I can say, personally, is I have never learned more from an actor that I’ve worked with than Jeffrey Tambor. And I consider him one of my favorite, most valued people in my life.

Comic genius actors aren’t necessarily the most emotionally stable individuals. Consider the Big Three on “The Larry Sanders Show” in the 1990s: the great Garry Shandling almost never worked again before his death a few years ago, and the last I’d heard of Rip Torn he’d driven his car into a glassed-in bank lobby thinking it was his home driveway, leaving Jeffrey Tambor last man standing. Individuals as funny as Tambor, Torn, and Shandling have enough troubles of their own making without political interest groups like the transgendered conspiring to get them fired.