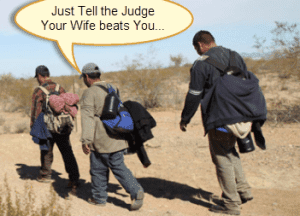 The nation’s top immigration court ruled last week that women who suffer severe domestic violence in their country may be eligible for asylum in the United States — and that decision is already affecting hearings here.

Attorneys at the makeshift detention center for Central American women and their children were successful twice this week in securing asylum for their clients.

You can read the sob stories (no doubt made in the USA) by following the link but the key point for Americans (especially tax payers) is that no proof of any sort was required at all. A flat assertion is all that the Federal Bureaucrats styled “Immigration Judges” seem to plan on requiring.

Obviously this is going to enable any Female illegal to avoid deportation. This is so obvious that the Treason Lobby operatives involved are scrambling to deny it

But attorneys and policy experts say there’s no reason to expect a flood.

"Canada has been granting asylum on domestic violence cases for years and has not seen a big uptick,” said Blaine Bookey associate director of the Center for Gender and Refugee Studies

Canada of course does not border Mexico and does not experience the same influx of illegals. The Arizona Daily Star:

The number of women trying to cross the desert with their children jumped from about 12,000 last year to more than 66,000 this year. Many of them are fleeing entrenched poverty, gang and drug violence — some driven by rumors that the United States was giving families an opportunity to stay.

Tell Blaine Bookey to find a job looking after Americans.

These brazen lies of course put one in mind of Senator Edward Kennedy’s similar assertions when he sponsored the disastrous 1965 Act. Estimates by the Open Borders crowd can never be trusted as I noted in Youth (DREAMER) Amnesty Estimate Doubles. Will Gang Bill's 11 Million Amnesty Become 26 Million?

And they know they are lying. Remember Norbert Schei!