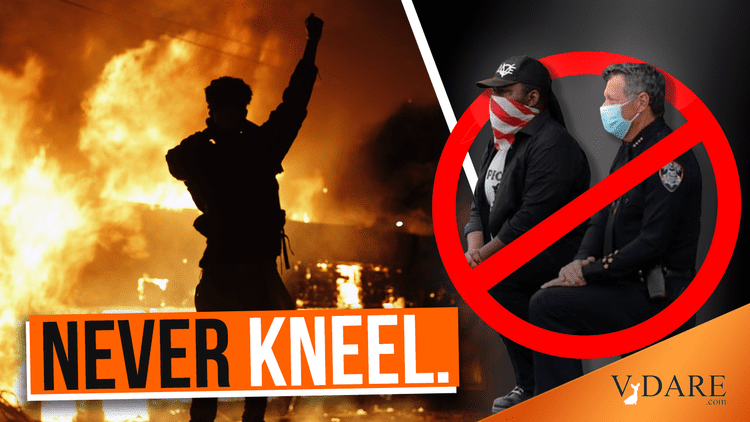 Law enforcement is toothless. Officials and legislators side with the insurrection, literally kneeling before our attackers. Rioting, looting, torching and assault are "peaceful protests" according to the Mainstream Media. Every Hollywood star and major corporation is against us—cranking out vicious propaganda and pledging billions—yes BILLIONS—of dollars to the same people who execute our cops in the streets.

Here at VDARE.com, we honor and support real Americans who recognize that this mob doesn’t seek justice. They seek vengeance. They don’t offer hope. They offer humiliation. They don’t want peace. They want power. And power in their hands means the complete destruction of America.

Why do we allow our cities to be turned into war zones? These are our communities. We have a say.

VDARE.com is the voice of the Historic American Nation—a nation that will never kneel to the mob. Knowing this, a truly heroic donor has offered a $20,000 matching grant to VDARE.com during the month of June. Stand up for America First journalism, and double the value of your donation today!