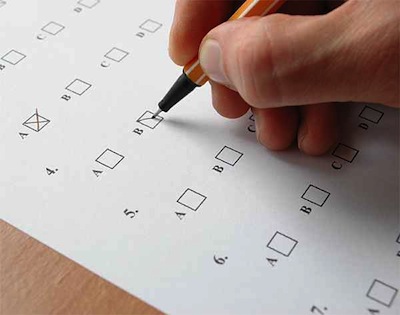 Wait, you mean unlawful foreigners actually had to DO something to get their freebie? They don’t just get a driving permit merely by arriving at the door of the DMV? They are expected to LEARN the traffic laws of Nevada in order to pass a written test?

Doubtless la Raza will now lobby to lower the standards of the test, which is clearly racist as shown by the results.

See my earlier report: Crowds of Illegal Aliens Jam Nevada DMVs to Procure Driver Cards. At that time, excuses were made that illegal aliens were nervous about being in a government office and that was the reason for some not passing the quiz. Now we know the statistics of the failure, and it shows the typical attitude of entitlement that illegal aliens have in this country: they believe they should get everything just by being here.

They estimate 75 percent of applicants have failed the written test needed for the card under a new law that made the state the 11th nationally to offer driving privileges to people in the country illegally. The cards became available Thursday.

Applicants must correctly answer 80 percent of 50 questions to pass the test. They also are required to pass a driving exam to receive cards. The failure rate on the driving test was not immediately available.

“We’d much rather see people come in prepared than just come in to see if they will pass or not,” DMV spokesman Kevin Malone told KSNV-TV in Las Vegas. “You need to study the (driver’s) handbook, make sure you have all the documentation and then come on in.”

Thousands more Nevada immigrants jammed DMV offices on Saturday to obtain the cards, forcing some offices to turn applicants away.

In Las Vegas, about 300 people were in line at most offices when doors opened.

“The offices are just packed,” Malone said. “The Sahara and Decatur offices have reached the capacity of the building so we have to wait for people to leave before we let more people walk in.”

In Reno and Carson City, offices began turning applicants away at 1 p.m., three hours before they closed.

“We anticipate we’ll have a high turnout at least for the first few weeks,” DMV spokesman David Fierro told the Reno Gazette-Journal.

A law passed by the 2013 Legislature and signed by Gov. Brian Sandoval allows immigrants in Nevada without citizenship status to obtain the driver privilege cards. An increasing number of states have been passing similar laws in recent years.

Backers of the bill say because many immigrants in the country illegally drive anyway, the law will make roads safer because they will be required to take the tests and have insurance.