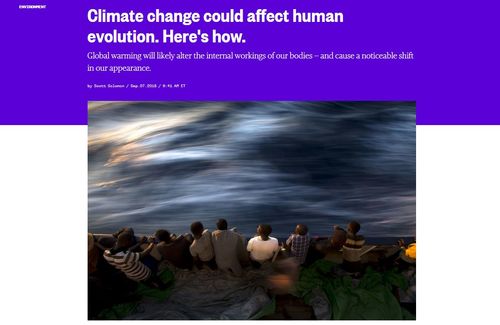 Global warming will likely alter the internal workings of our bodies — and cause a noticeable shift in our appearance.
by Scott Solomon / Sep.07.2018 / 6:41 AM ET

… Evidence suggests that a warming planet could melt away differences between human races — or population groups, as scientists more accurately call them.

The reason why climate change could reduce racial differences is that it will trigger massive migrations. In recent decades the world has become more urbanized, with people moving into large cities in coastal areas. But as polar ice melts and sea levels rise, large numbers of people will be forced to flee the coasts. And as droughts become more common and more severe, people living in more arid areas will have to move to places with more reliable sources of water.

These migrations will erode the geographic barriers that once separated human populations. In fact, this process is already underway. As of 2017, 258 million people were living in a country other than the one they were born in — an increase of 49 percent since 2000, according to a report from the United Nations. A World Bank report released in March predicts that climate change will cause 140 million people to migrate by 2050, with those now living in sub-Saharan Africa, South Asia and Latin America especially likely to migrate.

Demographic Change, in contrast, is nothing to worry about.

One consequence of large-scale migrations is what biologists call gene flow, a type of evolution caused by the blending of genes between populations. When people from different populations mate and reproduce, their genes intermingle in their children. That can lead to combinations of traits not seen in either parent or in the populations they come from — like the dark skin and blue eyes of Cape Verde islanders, the result of interbreeding between Portuguese and West Africans.

… Because skin color is controlled by many genes, parents whose skin color differs tend to have children with intermediate skin tones. And so in five to 10 generations (125 to 250 years), we may see fewer people with dark skin or pale skin and more with a brown or olive complexion. Having both dark skin and light eyes may become more common.

Blending of races is already well underway in ethnically diverse countries like Brazil, Singapore and the U.S. A Pew report from 2017 found that the number of multiracial births in the U.S. rose from 1 percent in 1970 to 10 percent in 2013. And the increase will continue — the multiracial population is projected to grow by 174 percent over the next four decades.

The bottom line? As people around the world become more physically similar to one another, it’s possible that racism might slowly fade.

Scott Solomon teaches ecology, evolution and scientific communication at Rice University. He is the author of “Future Humans: Inside the Science of Our Continuing Evolution.”