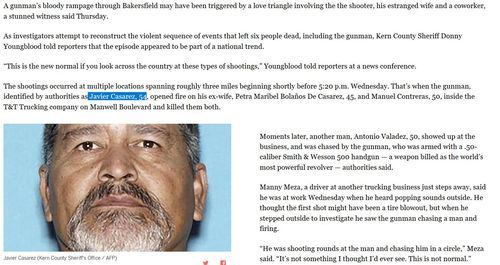 Hispanic Gunman In Bakersfield Killed 5 And Self In "Love Triangle" Shooting, MSM Focuses On Gun, Not Gunman

The Bakersfield shooting doesn't sound like it's the sort of thing that should be happening in America.

A gunman’s bloody rampage through Bakersfield may have been triggered by a love triangle involving the shooter, his estranged wife and a coworker, a stunned witness said Thursday.

As investigators attempt to reconstruct the violent sequence of events that left six people dead, including the gunman, Kern County Sheriff Donny Youngblood told reporters that the episode appeared to be part of a national trend.

“This is the new normal if you look across the country at these types of shootings,” Youngblood told reporters at a news conference.

The shootings occurred at multiple locations spanning roughly three miles beginning shortly before 5:20 p.m. Wednesday. That’s when the gunman, identified by authorities as Javier Casarez, 54, opened fire on his ex-wife, Petra Maribel Bolaños De Casarez, 45, and Manuel Contreras, 50, inside the T&T Trucking company on Manwell Boulevard and killed them both.

Moments later, another man, Antonio Valadez, 50, showed up at the business, and was chased by the gunman, who was armed with a .50-caliber Smith & Wesson 500 handgun — a weapon billed as the world’s most powerful revolver — authorities said.

Manny Meza, a driver at another trucking business just steps away, said he was at work Wednesday when he heard popping sounds outside. He thought the first shot might have been a tire blowout, but when he stepped outside to investigate he saw the gunman chasing a man and firing.

“He was shooting rounds at the man and chasing him in a circle,” Meza said. “It’s not something I thought I’d ever see. This is not normal.”

The gunman got in his car, followed Valadez to the nearby Bear Mountain Sports shop and fatally shot him, authorities said.

Meza said other employees told him that the gunman worked at T&T Trucking and suspected that De Casarez was having an affair with one of his coworkers.

About 15 minutes after the first shootings, authorities received a call that the gunman had showed up at a home in the 9400 block of Breckenridge Road and opened fire, killing Laura Garcia, 31, and her father, Eliseo Cazares, 57.

“We believe [Garcia] may have intervened to keep the suspect from approaching her father and he shot and killed both of them,” Youngblood said.

I don't know which of these people are immigrants, legal or illegal, or which are Mexican-Americans, native to the United States, but of course, the Los Angeles Times is more interested in what gun the Hispanic gunman used, and in quoting the anti-gun Violence Policy Center, which always weighs in on these things to argue for guns being taken away from Americans.