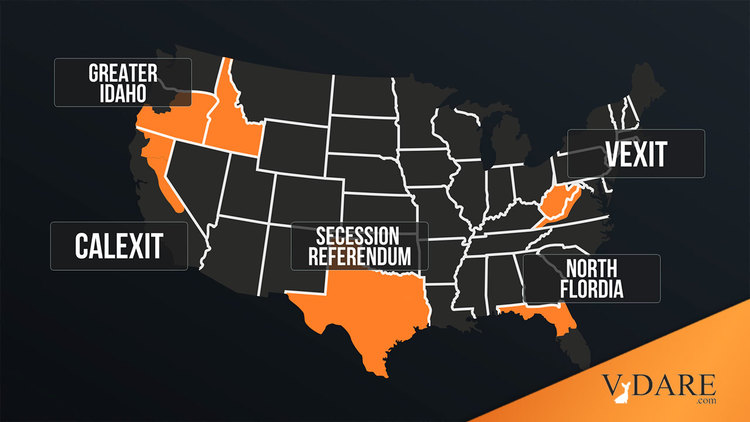 #NationalDivorce Trends On Twitter. Is The Historic American Nation Ready For Secession?

The secession movement received a boost today on Twitter when #National Divorce trended.

“#NationalDivorce is the only way forward at this point,” Albus Dumbledore wrote:

State to state, we are so different ideologically that we no longer identify as a cohesive nation.

It's better to split than “stay together for the kids”.

#NationalDivorce is the only way forward at this point.

State to state, we are so different ideologically that we no longer identify as a cohesive nation.

It's better to split than "stay together for the kids".

Differences that have led to the discussion include these:

Japanese immigrant Senator Maize Hirono says knowing what the Founder Fathers meant when they wrote the Constitution is impossible:

JHC. No sane moral person would make this trash available to schoolchildren. It's insane that we even debate this with the freaks and ghouls in the #DemocratParty. Only a #nationaldivorce will protect us from this evil.#LiberalismIsAMentalDisorder https://t.co/ozYh4C314Z

This is a result of Rep presidents, Dem presidents, Rep congresses, and Dem congresses. There is no saving or fixing the US federal gov. If this doesn't prove it, I don't know what would. #NationalDivorce #Texit https://t.co/dpbHu6eeyE pic.twitter.com/Mo9eMu10X5

AT THE PRESENT TIME, New Hampshire exists as a sovereign state of the United States of America.

IF THE AMENDMENT IS ADOPTED, New Hampshire will peaceably declare independence from the United States of America and proceed as its own sovereign nation.

New Hampshire WILL be the first state to declare Independence from the empire. #NHexit https://t.co/9lscntvmqE #NationalDivorce pic.twitter.com/FPiN0KpY4J

One writer says a divorce can only succeed on the county level:

A #NationalDivorce will not occur at a state level. There are no red or blue states. States are not homogeneous. A breakup needs to be county level. Blue keeps blue and red the red. Red would have the food, power and water. Blue would have their beautiful ant hill cities. pic.twitter.com/eEa8LSbAEy

VDARE has been pushing the idea for years. Maybe the Historic American Nation knows its time has come.